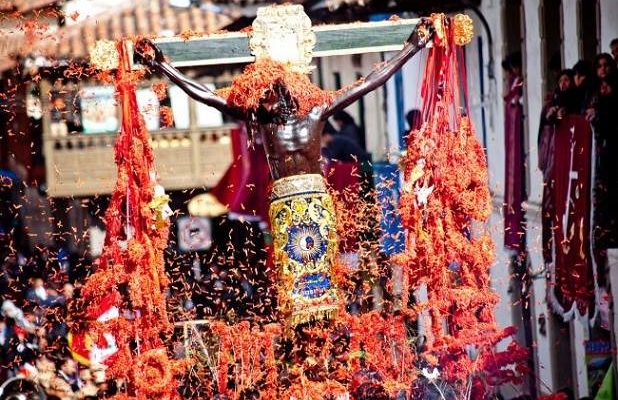 Easter week is a big deal throughout the predominantly Catholic, Spanish-speaking world and Peru is no exception. The country really comes alive during Semana Santa, the week leading up to Easter. This year, revelers will start celebrating Holy Week on Palm Sunday, April 13. The celebrations will wrap up the following week on Easter Sunday, April 20.

While almost every city in Peru will host some type of parade during Semana Santa, Cusco‘s might just be the most beautifully complex and historically represented in the nation.

It all started in 1650 when a major earthquake shook Cusco, leveling buildings and taking lives. It was complete chaos everywhere except in one place – the Cathedral of Santo Domingo. Legend has it that a painting of a crucifix protected the people inside. Since then, the city has held its annual El Señor de los Temblores (“The Lord of the Earthquakes”) festival on the Monday between Palm Sunday and Easter Sunday. Believers say El Señor, who is Cusco‘s patron saint, controls the earth and her good fortune and that by worshiping the Lord of the Earthquakes they will be protected from the dangerous tremors which shake the Andean region on a regular basis. Witnessing the procession person is a great way to better understand how religion still plays an important part of life in Peru and to see first hand how Incan traditions are still deeply rooted and intertwined with modern-day Catholicism.

This ritual, which marks the mix of Christian and Incan beliefs (scholars believe Incans also held similar processions to appears the earthquake gods), is definitely is a must-see if you can plan your trip around it.

Once a year El Señor leaves the cathedral for his annual exit and procession around the city. Thick clouds of incense cocoon the streets, as Christians remember Christ’s Crucifixion. In a dramatic display, pious participants dressed in deep-purple robes bear the floats, which can weigh anywhere from a couple hundred pounds to a few tons. Each ornately decorated float is adorned with colossal sculptures of Christ, the disciples and the Virgin Mary, along with fresh flowers, precious metals and colorful jewels.

At the end of the procession, the Lord returns to La Iglesia de Santo Domingo, which happens to be built on top of an ancient temple that honors the pagan god Apulla Tikse Wiracocha (again blending Catholicism with Incan tradition). Once back inside, the clouds symbolically part taking the summer rains with them and welcoming the dry season as well as a spate of harvest ceremonies.

An easy place greet El Señor de los Temblores is Cusco’s Plaza de Armas. You’ll be centrally located to see and do other things once the procession passes through. It’s also a place that ties the present to the past as today’s Plaza was built directed atop the main square used by the Inca’s as a gathering spot. The event always takes place the Monday after Palm Sunday, though keep in mind, Easter changes annually so plan accordingly.