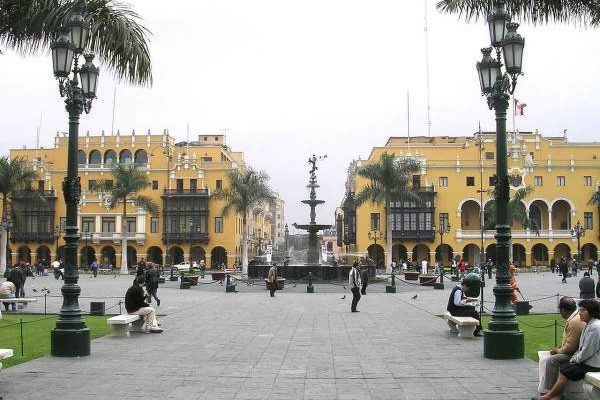 Lima is a city travelers love to hate. Polluted, big, ugly, and with a reputation as a dangerous, pickpocket filled city, Lima is usually no more than a stop over for backpackers. Did you know though that Lima was once called the “City of the Kings” and was a rich, powerful colonial power in the New World? Most people fly through Lima, giving it no more than a night or two on their way to “bigger & better” sites but Lima is a true gem on it’s own. With a historic center dating back to the founding in 1535, Lima has some of South America’s most impressive colonial architecture and world-class museums. See what “old” Lima has to offer up…

The center of the old historic center, the Plaza de Armas or Plaza Mayor is supposedly the exact spot where the city was first founded in 1535 by Francisco Pizarro. Originally the name was “The City of the Kings” in Spanish but the old native Quechua and Aymara name of Lima was what survived through the years. The Plaza is a beautiful example of Spanish city planning and is surrounded by many of the city’s “must-see” architectural sites – The Cathedral of Lima, the Government’s Palace, the Archbishop’s Palace, and others. The balconies of this colonial building are shockingly beautiful. Build by Don Bernardine Jose de Tagle Portocarrero, the Palace is one of the most famous of Lima’s historic architecture sites. Now-a-days, it holds the office of the Ministry of Foreign Affairs.

Every new city in the America’s had to have a cathedral and Lima’s is a grand one. The cathedral standing today is actually not the original; not even close. The cathedral has been rebuilt a number of times over the decades after suffering a number of earthquakes and deterioration.

The Church and Museum of San Francisco

If you like a bit of creepy mystery on your travels, the catacombs of the San Francisco monastery is a great place to visit. The catacombs hold the remains of thousands of the city’s early residents but the museum and library of the monastery hold the real wonder for history buffs. The library is home to some of the New World’s oldest and best preserved documents and early books.

The Palace of the Government, another beautiful, historic building, is best seen around noon when the guard is changed. The palace is the official home of the President of Peru and his family.