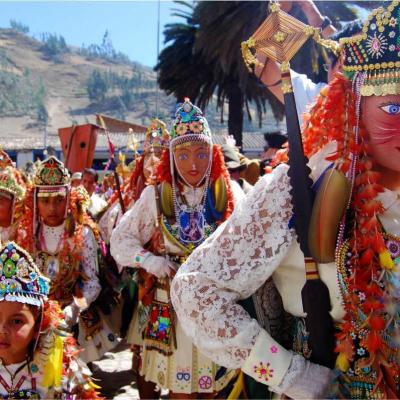 Carnival doesn’t only exist in Rio, Peru also takes part in the festival. Today, Christelle takes you to dance. Sign up here for unforgettable festivals, full of colors that await you.

When it comes to the jungle, the party in San Juan, on June 24, is well known. Personally, I only went once and was overwhelmed with the large amount of people. It would be much better to find a nice family, eat juanes along the river and of course, go dancing all night.

Or opt for a completely different plan: fly to Tarapoto and take a ride to Rioja, 2hr 30min, in Altomayo, where they celebrate Carnival with parades and floats. Diablos de Rioja are a group of symbolic guests that go to tease and punish the public, while different dance groups battle for the best show. The outside spectacular is full of colors. Beware, the tradition includes battles with water, but it’s a treat in the hot sun. Main Dates: February 21 and 22

Tips: Do not forget to visit Toé Raul del Aguila, the house-museum. There, he reconstructed the history and explains the traditions of the people; Raul is the soul of Rioja Carnival (Jr. Libertad 1225). Buy a bombonaje straw hat made in the city on the way (look for Mrs. Leito or visit the Fundo Nueva Esperanza). And for a full immersion, try Don Goyo Vela’s exotic cocktails in the Chuchu Center (Jr. Bolívar, in the Alfaro sector, going towards Chorro Uquihua, (042) 558 387). To rest? Visit the bungalows of Villa Maria, just 20 minutes outside of the city; rustic, but nice and quiet. And if you like a bit of adventure, wander along the river in Santa Elena.

Where else? In Iquitos they celebrate on February 13 this year at the Plaza 28 de Julio. The real party is in the neighborhood, where people throw buckets of paint. But they only play with the people they know.

On the road headed to the Parque Nacional Manu, find the town of Paucartambo. From July 15 to 18, this peaceful village, with adobe houses and tiled roofs, is crowded with masked people and colors. The feast of the Virgen del Carmen or Mamacha Carmen, the patron saint of mestizos, consists of masses, processions, dances and songs performed in Quechua. A battle “to laugh” dramatizes the fight between Qollas (the inhabitants of the highlands, representatives of Collasuyo) and the Chunchos (originating in the jungle, representatives of Antisuyo). Look up at the beautiful, celestial, wooden balconies. But look out: the Qollas throw dolls, miniature furniture and other demons, the Saqras, take cover! The main day is July 16.

Tips: Do not forget to wait for the sunrise. Head to the Mirador de Tres Cruces and the entrance to Acjanaco. From this natural balcony, watch the sun rise like a fireball on the thick blanket of the jungle. Directions: take the transportation from Virgen del Carmen or a bus in Gallito de las Rocas (Av Diagonal Angamos.). From Cuzco, 4hrs for S/.20- 30, to Paucartambo. In the village there are basic accommodations. It is recommended to take a tent and sleeping bags in case all the places are full. Some travel agencies arrange these accommodations, such as Apus Perú.

Where else? Another festival that mixes Christian pilgrimage and Andean roots is the QoyllurRi’ti. It is the largest pilgrimage in the Andes. Thousands of people from around Cuzco parade to the sanctuary located in the valley of Sinakara, about 3 miles by foot from Ausangate. Be sure you are used to the altitude and in good physical condition. It is worth the effort for the faith of the people walking by your side, the music, the parades, camping in the middle of nowhere and enjoying invigorating soups in the cold early mornings. The pablitos or pabluchas, characters dressed in alpaca wearing animal masks, are in charge of maintaining order. This year, this will take place on May 31 and June 1, 2015. To get there, take a bus from Cuzco to Mahuayani (4 hours). About 5 miles, 5 hours uphill.

La Danza de Tijeras is one of the most striking symbolic dances of Peru: dancers dress in white, embroidered costumes with threads gleaming of phosphorescent colors, dancing to the sound of the harp and violin. Their dance worships the mountains, where they get their strength, chiming their scissors to mimic the sound of the running water of the streams and lagoons. These scissors, 25 cm long, are the manifestation of the power of the gods through the hands of the dancer. A few days before YakuRaymi, a traditional festival of the village of Andamarca, at the foot of the waterfall PuzaPaqcha, several young people, from the surrounding towns, are enshrined. You can join them in this ritual. But, don’t miss the real festival. The main day of YakuRaimi consists of a mass, a procession worshiping the water and celebrating it around wells with various costumed characters. Every evening, the Plaza de Armas has its Atipanakuy, a type of “show”, where various dancers compete. The public chooses the bravest competitor with the best dance moves. These competitions last for hours and finish by testing their real values, something brutal. But, it is a unique opportunity to see the dancers in a traditional festival.

Tip: Andamarca is the last village of Valle del Sondondo. Now, there is a road connecting Huamanga and these towns full of typical, Andean terraces. One route takes you to pre-Inca bridges, dwarf volcanoes and condors. The accommodations are basic: adobe rooms with hot water. We recommend Hospedaje Andenes, with its beautiful garden, contact Jaime Damian. Or Pedro Flores and Lydia Medina in their “home-hostel”, Cielo Azul. El Yacu Raymi or “Water Festival” is held every year on August 24 and 25.

Where else? In Huamanga, the festival of the Danzantes de Tijera is in the neighborhood of Belén on the day of the Bajada de Reyes, at the beginning of January. Also, if you visit Andamarca or the towns of Sondondoa, book an excursion to the ruins any day. In Lima, the restaurant-spectacular at Brisas del Titicaca present folklore and typical Peruvian dances, with many competitive performers.