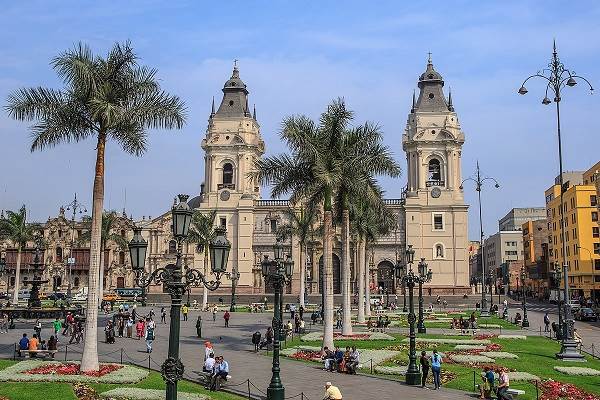 Lima is known for the architectural beauty of its buildings and squares. In this post get a feeling for the places you cannot miss during your visit to the Peruvian capital.

Located in the historic center of Lima, it is the main public space of the city. Surrounding the square, discover the Government Palace, the Cathedral of Lima, the Arzobispal Palace of Lima, City Hall and the Union Club.

Explore the Cathedral of Lima

The Cathedral of Lima is one of the principal churches in Peru, located in Lima Center. Its design has a perfect mixture of the architectural styles that were first developed in the city from its origins and today´s style.

Plaza San Martín was constructed as a part of the first centenary tribute to the Peruvian Independence. During the first half of the last century, it was one of the busiest areas of the city. Great numbers of cafes and bars have since opened around the square. Places dedicated to entertainment and culture have helped fix the appearance of this newly modernized plaza.

The Magic Water Circuit in the historical Reserve Park in Lima is the largest fountain complex in the world, in a public park. The circuit has a collection of 13 fountains with colors, illumination and amusing shows. You can visit the fountains from Tuesday- Sunday, from 3:00pm- 10:30 pm. The entrance fee costs S/. 4.

China Town in Lima is the part of the city that has created affluence for Chinese inhabitants. It´s the perfect place to enjoy a mixture of Peruvian and Chinese cuisine.

An Afternoon of Museums

The Pre-Columbine and colonial history of Lima can be discovered in the many museums in the city. The Lima Art Museum is one of the chief museums in Peru, located in the center of the city. Some other options to learn more about the Lima´s history include: El Museo de la Nación, El Museo de la Inquisición and El Museo Larco.

The Fortress of Real Felipe

It is one of the few military architectural works, and the largest built by the Spaniards in America.

A Night at the Theater

The theaters in Lima hold important, international shows throughout the year, where you can watch incredible presentations or symphonic concerts. The major theaters are: the Gran Teatro Nacional del Perú, the Teatro Municipal de Lima, the Teatro La Plaza and the Teatro Peruano Japonés.