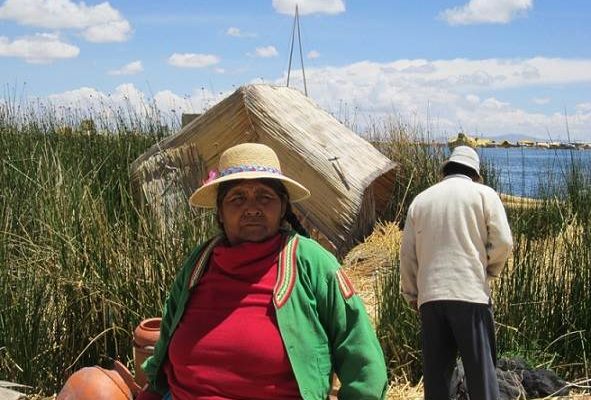 Step off your boat, onto the hay, and meet the Uros people – a people shrouded in mystery, wrapped in myth and lore.  According to legend, they are the oldest people on the earth – older than the sun itself, their existence stretching back to times long ago.  A peculiar people – set apart in origin and quality.  Their blood, black as night, rendered them immune to the cold.  They could not be struck by lightning.  They could not drown.

But all this was lost.  And as we leave the mists of prehistory we find a different people.  For somewhere along the line, the Uros lost not only their superhuman qualities but even their language as they intermarried with the surrounding Aymara people.

Now we find a people suspended between the waters and the heavens. For centuries they have been the people of the lake, and Lake Titicaca has been their home.

And while they may not possess the divine qualities of lore, no one can deny their ingenuity.  For these creative people, seeking to flee the hostility of their neighbors, created a land of their own – literally – and have fashioned more than 40 floating islands made from the totora reeds that grow in the shallows of the lake.

Their islands are formed by lashing together the dense root clumps of the totora to form a stable base and by laying the reeds in layers on top.  New reeds are continuously added to the top as the bottom layers rot away creating islands that while constantly changing, have also been around for decades – the oldest supposedly lasting for over 160 years.

And the reeds have provided the Uros with more than just their islands.  Truthfully they form an indespensible part of their way of life.  Their houses are also constructed from these reeds.  Boats are made from them for transportation.  The totora is even used as fuel for cooking fires by lighting them on top of rocks or root clods.

Now the Uros are again undergoing a time of great change, and while they are in no danger of losing qualities of myth, they find themselves once again in a battle to maintain their culture, their way of life, their identify.  Once it was intermarriage with the Aymara that lost them their language.  Now it is the ways of the Western world that beckons to them.

In what can only be described as one of history’s ironies, we find that while the developed world has brought the tourism that sustains them, it has proven to be a double edged sword for the Uros people.  With increased exposure, the appeal of the West has proven increasingly alluring to each succeeding generation.

Could it be that the people of the lake – these people who outlasted the mighty Inca by centuries – will find that they too are threatened with numbered days, or will the ingenuity and flexibility that has marked these people for so long pave the way for their preservation?  Only time will tell.