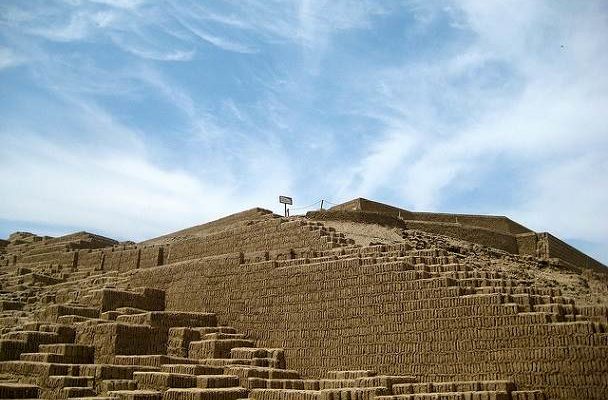 Nestled into the bustling business buildings of Miraflores lies the Huaca Pucallana Ruins, originally built around 500AD by the Lima Culture which lived on the Pacific Coast. The ruins consisted of an administrative center, which was the site of public meetings, and a ceremonial center, the site where the priests conducted religious ceremonies. The two centers were separated by a large north-south wall and the religious center had a pyramid that stood over 22 meters tall. The entire structure is surrounded by a plaza or central square which creates its outer border. They constructed buildings, homes, ramps and patios using hand made bricks.

Although the structure was founded and built by the Lima Culture, the Wari Culture, arrived in the coastal area of Peru in 700AD and overthrew all other cultures. At this point, the Waris used the large pyramid as a burial place. The Ichma Culture (Pachacámac worshippers) imposed their ways by destroying the graves. Once the Incas arrived many years later, Huaca Pucallana was considered “an old sacred village.” With the expansion of modern society, from 1940 on, the area was simply used as a dumping grounds for trash and trails for dirt bikes and parts were bulldozed to allow for the construction of new homes and roads.

Sometime in the 19th century, travels and explorers discovered there was something to the dirt mound and professional investigations began mid-20th century once the top of the pyramid was discovered. In 1991, the “Instituto Nacional de Cultura” (Peruvian Cultural Institute) and the “Municipalidad de Miraflores” (Municipality of Miraflores) signed an agreement to allow the Huaca Pucllana to be a historical site.

During the process of excavation and investigation, textiles made from alpaca or vicuña, ceramics decorated with snakes and fish in black, red and white paints, bones and stone tools have been found. Animal remains show evidence of alpacas, guinea pigs, ducks, and fish. Agricultural clues leads archeologists to believe that they had foods like corn, squash, beans and fruits such as guayaba, pacae, lúcuma and cherimoya. Homes were built close to irrigation channels and daily life included fishing, gathering, hunting, and manufacturing agricultural and fishing tools. More recently, 4 well preserved mummies were uncovered, presumably from the Wari Culture.

The Huaca Pucllana complex now consists of the archaeological ruins itself, a small museum, an area for workshops, a small souvenir shop and the infamous Huaca Pucllana Restaurant. This is one of the largest ruins in Lima and holds so much history, it really is a worthwhile visit.