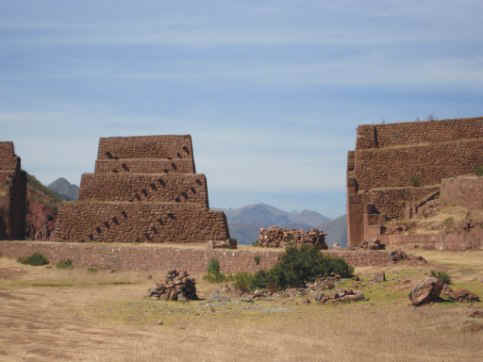 Cusco is a festival of sights and attractions, some of them yet to be discovered. We present you the southern valley: the other valley. The walk-through of the Cusco-Puno passing through an important mountain scenery, picturesque villages with a good Gastronomy and Hispanic and colonial architecture, naturale mirrors and culture alive. Come and discover the other valley.

This picturesque set of terraces, long stairways and stone canals is located 20 km south of the city. Evidence suggests that Tipón was part of a royal hacienda belonging to Inca Yahuar Huaca, as well as a place of worship and agricultural research. An outstanding is the sense of harmony in the channeling of water via stone structures including aqueducts (some of which are underground), waterfalls and gullies, indicating the Incas’ knowledge of hydraulics.

Built at the peak of the Wari culture (500-900 AD), this large urban and ceremonial center of almost two square kilometers was built as a massive set of stone and mud structures on a hill overlooking the beautiful Lake Lucre or Huacarpay. Pikillacta, or “city of fleas”, is perhaps the largest pre-Inca urban center in the area. It gets its name from its numerous enclosures (measuring just 4 meters each) which, it would seem, were part of a garrison constructed to protect the site.

One of the most beautiful colonial towns in the region, has a picturesque main square with leafy pisonay trees hanging overhead, which is surrounded by old estates. Its main attraction is its distinctive church, San Pedro de Andahuaylillas, which was built in the seventeenth century and is considered to be a World Heritage Site by UNESCO. Its interior, elaborately decorated with paintings, is simply breathtaking. It also houses oil on canvas paintings from the Escuela Cuzqueña and Baroque altars made of carved.

Built in the fifteenth century, it is considered by the historians to be one of the most audacious Inca constructions. The remarkable Wiracocha temple, 100 meters (328 feet) long and 20 meters (66 feet) wide is made of adobe walls built on top of volcanic stone foundations. The complex also includes a residential area made for the Inca nobles and dozens of circular warehouses to store food.

The Q’eswachaka bridge is located across the Apurimac river, at about (3,900m/ 13,000 feet), in Canas province. This handwoven grass bridge spans 120 feet, and is rebuilt every one or two years as communal effort by all the local people of the region. About 700 men and women form the communities Huinchiri, Ccollana come to Q’eswachaka to a Fiesta that celebrates the construction of the bridge. The final day of the fiesta is the second Sunday in June, where you can see typical dances and walk across the completed bridge. You can also visit the bridge site, in the days preceding, to see the bridge building in progress.
The weaving and construction techniques have passed from generation to generation since the bridge was first built by the Incas. It is the only remaining example of an “Inca” hanging bridge that can be seen today.