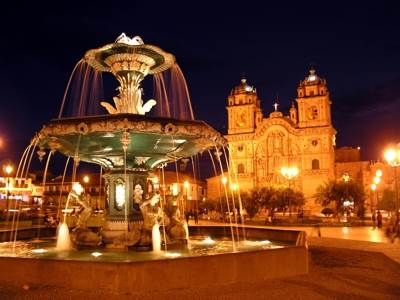 One of the most important places in the world, Cusco is the ultimate destination of the traveler who travels throughout Peru. Between adventure and contemplation, there is room for both food and for history and archeology. The warmth of international passers are part of everyday life. And if you know Cusco, you know you have to come back, because Cusco has a lot of places to discover.
Review the most important places of the Cusco City:

Occupies the same place that the plaza Huacaypata (Quechua language, groan lament) that was traced by Manco Cápac when founding the city of Cusco during the XII century. Around it the Inca kings Pachacútec, Sinchi Roca, Viracocha, Túpac Yupanqui and Huayna Cápac built their royal palaces, and the Acllahuasi (Temple of the Virgins). It was the place where the Inti Raymi took place in time of the Incas and the military celebrations after the victory in battles. Since the arrival of the Spaniards, the dimensions were diminished because of the areas around constructed that still remain such as the Cathedral, Iglesia de la Compañía (Church of the Company), the portals, arcades and large houses. View Map

The artistic barrio (neighborhood), of narrow and high streets, beautiful little plaza, and a beautiful paqcha exists; in this barrio numerous artists and artisans reside, there are located the workshops of famous artisans such as the family Mendivil, Olave and Mérida.  Panoramic views of Cusco city.
In the main square of San Blas, a church believed to be built over an Inca shrine dedicated to the worship of the god of lightning or Illapa. In the temple, there is a beautiful pulpit carved from a single piece of wood, consider as the highest expression of the colonial age. A church is reached by following the slope of the street San Blas Hatunrumiyoc.

Located in Plazoleta Santo Domingo. Admission fee. The inca place form the base of the colonial church and convent of Santo Domingo. The Coricancha (Quechua language: gold enclosure) was the main Inca temple, the Temple of Inti (the supreme god – the sun), it is a masterpiece of the Inca architecture, built in blocks of carved granite and smelted gold in the junctures of the blocks. Inside the temple existed a garden in which the trees, birds, animals, etc. were represented in gold. The temple was surrounded with a gold cornice and all the walls covered in gold plates. In the sanctuary a great disk of gold existed (Punchau) that represented Inti, the mummies of the Inca kings until Huayna Cápac (12th king), they were seated on gold seats and adorned with jewels, with the expression of being alive.
Annexes to the Coricancha, were the temples of “Quilla” (moon), Illapa (ray), the stars, Chuychu and Uíllac Umu’s lodgings (supreme priest). At the arrival of the Spanish conquerors it was plundered savagely and it was almost destroyed to banish the adoration to Inti, and over it a catholic temple (Santo Domingo) was built.
All the Inca roads of the Tahuantisuyo converged in the Coricancha, besides being the central point of the administrative division of the empire, and where the four “suyos” began and converged.
Museum: Next to church of Santo Domingo. Archaeological museum displays interpreting the Inca and Pre-Inca cultures.

Located in Mantas 121 Street, one block from the Main Square. Admission fee. It was the third founded in Peru (1536), it is a colonial architectural monument, of beautiful golden altarpieces, plateresque pulpit and a choir that constitutes a joinery masterpiece. The temple is adorned with beautiful canvases of Escuela Cusqueña. Their most valuable treasure is the monstrance, of unimaginable value; goldsmith piece made of gold, weight 22 kg. and it measures 1.3 meters height, which contains 2 enormous pearls and 615 of smaller size, 1,581 diamonds, besides emeralds, rubies and topazes. In the basements of the church rest remains of the Spanish conquerors Diego de Almagro, Almagro El Mozo (Almagro the Youngster), and Gonzalo Pizarro. Restored in 2008.

An imposing example of Inca military architecture, the fortress of Sacsayhuaman was built using large slabs of granite to safeguard the city from attack by Antis, or invading forces from the East. Sacsayhuaman (“satisfied falcon” in Quechua) is made up of three large terraces which overlap in a zigzag formation surrounded by enormous stone ramparts of up to 300 meters in length. Its elevation and proximity to Cuzco, as well as the dimensions of the stones –up to 5 meters high and weighing up to 350 tons– made Sacsayhuaman a quarry for certain structures in colonial Cuzco.

Kenko is a ritual site built on a sole outcrop of limestone, with underground galleries and a semicircular amphitheater. Puca Pucara (in Quechua, “red fortress”), was a military installation made up of stairways, terraces and large walls which once formed part of the capital’s defense system. Both structures are part of the archaeological circuit near the city of Cuzco.

Also known as the “Baños del Inca” or the Inca baths, Tampumachay was apparently a site dedicated to the worship of water and a resting place for the Inca monarch. Among its most notable features are its system of aqueducts, canals and cascades carved in stone, designed to channel water flowing from a nearby spring. According to experts, Tampumachay was also a kind of royal garden, abounding in ornamental vegetation and fed by an intricate network of canals.