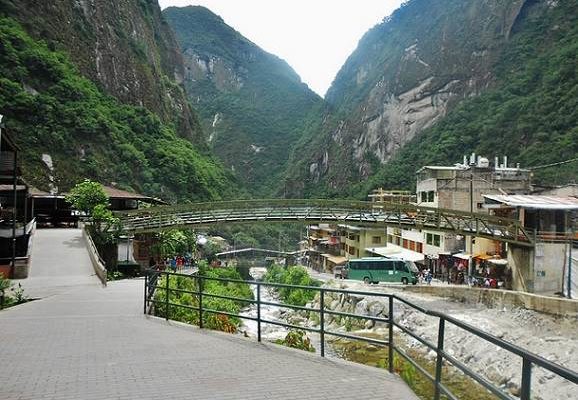 At the far end of the Sacred Valley, the road disappears, the mountains close in around the train and the river. The vegetation starts to go jungly – tall trees hung with lianas, brilliant orchids. You´ve descended nearly a kilometre and the oxygen hits you like a jolt of energy; you feel so good down here. As you get closer to Macchu Picchu village (Aguas Calientes), huge shark-tooth-shaped jungled peaks just soar a thousand metres straight up from the narrow valley floor. It´s spectacular.

Above you are glimpses of the site itself – terracing, grey stone wall. We spent a couple of days circling round the idea of Macchu Piccu itself (and loving Aguas Calientes, in defiance of the guidebooks and thousands of people who are only ever there for ten minutes on their way back to Cusco.) You can follow the train tracks miles in either directions, climb this mountain (name escapes me) opposite the ruins – a very hairy climb/scramble up a steep jungly path, which then gives way to wooden ladders bolted to the rock.

We went up to the site a couple of days later, up in time to watch the sun rise over the mountains and light it all up. We spent all day (reading, sleeping, waiting out the crowds, avoiding the groups) then explored just before sunset. It’s vast, intricate, filled with small wonders – a system of ceremonial baths fed by a narrow canal where water still flows, an enormous, mysterious carved boulder in a temple site.

(Actually, it´s also quite chilling, imagining the people that could have built this high and this well. Would involve a pretty cold-blooded use of builders). Anyway – thing is, it totally exceeded both our expectations. We headed over to Qorikancha, we knew exactly where it was from our attempt to buy the tourist ticket. Qorikancha is one of the original Inca buildings. When the Spanish came to power, they used the Inca buildings as foundations for the Spanish buildings. Qorikancha was the foundation for the San Franciscan Monastery. There have been two major earthquakes in Peru, 1650 and 1950. The majority of the Spanish buildings were in ruins after each earthquake but the Inca walls withheld with minimal damage. You could see some damage at Qorikancha but it was explained that the reason was that the walls were not designed to withstand the additional loadings that were caused by the extra Spanish walls. We then went and saw the cathedral in the Cusco plaza. Inside we a lot of painting and statues of Jesus during his life. One interesting painting is a Peruvian interpretation of the last supper. Instead of lamb being the main course, it features Cuy or as some like to call guinea pig.