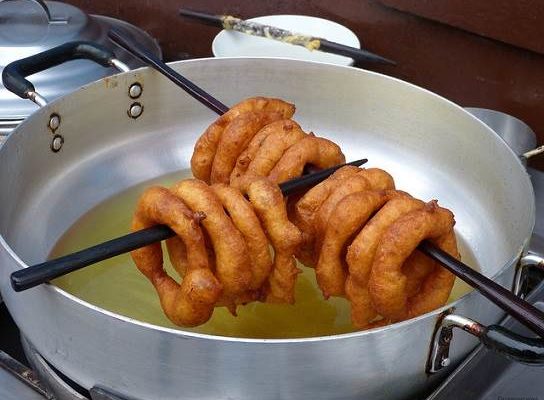 Peru isn’t called the gastronomic capital of Latin America for nothing. From citrus-infused ceviche to hearty lomo saltado, Peruvian cuisine is nothing less than a feast for the senses. But what about the sweet side of Peru? Well, that’s a world all its own.

One epicurean custom that I really love about Peru (and one think the rest of the world should adopt) is the tradition of afternoon coffee and dessert. I spend a lot of time in cafes, sipping lattes and people watching, and every day between say 3 p.m. and 6 p.m., the cafes fill with Limeños looking for a way to hunger (Peruvians typically eat dinner after 8 p.m. and as late as 10 p.m.), connect with friends and cure their sweet tooths.

So while the New Year may be here, and while you may have made a resolution to drop a pant size or eat healthier, I say this: Peruvians have spent centuries perfecting their recipes, so you can dump your diet for a few days to taste why the world is raving about Peru’s sinfully divine desserts.

Tres Leches
When I asked a group of locals (both by birth and association) which dessert was the must-try for visitors to Peru, tres leches came up the most often. This creamy cake made from, you guessed it, tres leches (condensed milk, evaporated milk and heavy cream), is found all over Latin America and every country seems to claim it as its own, Peru included.

Manjar Blanco
Few Peruvian desserts are complete without manjar blanco, also known as dulce de leche. Similar to caramel, this cream is stuffed in doughnuts, topped on ice cream and eaten with a spoon all on its own.

Suspiro de LimeñaTranslated, suspiro de limeña means “Limeñan (someone form Lima) Woman’s Sigh.” I’m guessing the creator of this recipe name it so after she tasted it and let out a sigh of utter pleasure of the palate. The manjar blanco, or dulce de leche, layer is made of condensed milk and sugar that is boiled down into a thick cream. Then the rich dessert is topped with a merengue, made of more sugar, egg and a touch or port wine. See why suspiro de limeña makes Peruvians “ooh” and “ahh” by trying it for yourself.

Lúcuma Ice CreamThis tropical fruit native to the coastal highlands has been the go-to sweet treat of Peruvians since the times of the Moche. Later civilizations called it the Gold of the Incas. Now Peru has taken this fruit to the next level via ice cream. Perfectly spiced, velvety smooth and refreshing, lúcuma ice cream reminds me of a better version of America’s pumpkin-spiced everything. Seriously, it’s that good.

Pro Tip: Peru is home to hundreds of amazing fruits. Read about some of the out of this world fruit that grows natively in our guide to The Wild and Wondrous World of Peruvian Produce.

Maracuyá CheesecakeDon’t let the “New York-Style” description scribbled on menus deter you from trying this very Peruvian recipe. While the cheesecake is slightly Americana, the tangy maracuyá, also known as passion fruit, is all Peru.

ChocolateIn Peru, chocolate grows on trees. For real. The bean that ultimately becomes the chocolate so many of us know and love actually comes from a fruit called cacao. One of the best ways to experience chocolate is in Peru with a trip to the ChocoMuseo, a museum, workshop, café and store with locations throughout Lima, Cusco and the Sacred Valley.

PicaronesCooked quinoa or mashed sweet potatoes are made into a dough, poured over hot oil and fried to a crispy on the outside, chewy on the inside delightful dessert. As a finishing touch, they are drizzled in syrup.

Arroz con Leche
For many Latinos, rice pudding is one of those comfort foods that no one can cook up better than their mamas. Creamy, slightly chewy and served warm or chilled, arroz con leche is at the heart of dessert not just in Peru but across Latin America and the Caribbean.

Alfajores
Derived from the Arabic word meaning “stuffed”, alfajores consist of a buttery and rich manjar blanco sandwiched between two cookie wafers that are dusted with powdered sugar. They travel well, so pack a few boxes for your friends back home.

Mazamorra Morada
While foreigners are used to corn in savory dishes, Peru has managed to turn this grain into a dessert. With a base of purple corn, mazamorra morada is spiced with cinnamon and clove and mixed with diced apples and apricots. I hear the best way to indulge is to mix it with arroz con leche, suspiro or picarones.

Eating turrón de Doña Pepa is a religious experience; I kid you not. While this dense and flaky sweet is eaten year-round, it is closely related to the Catholic festival Señor de los Milagros. The layered shortbread-like pieces are stacked, bathed in honey or molasses and sprinkled with the colored candies used in Doña Pepa cookies.

Pro tip: Try Doña Pepas on their own. Most bodegas, street carts and grocery store carry this cookie lathered with chocolate and topped with sprinkles.

Queso HeladoWhile this dessert has the word ‘queso’ in it, cheese isn’t actually found in the recipe. Instead this rich ice cream is made up of milk, coconut and vanilla which are churned and frozen and later sprinkled with cinnamon and clove.

TejasOriginating from the Ica region are tejas, bite-sized chocolate candies made of dried fruit, nuts and dulce de leche. They come individually wrapped, so they are great for a quick treat for yourself or for those not lucky enough to tag along on your adventures through Peru.

Anything with Guanábana Similar to cherimoya (custard apple) but even stranger in appearance is the tropical fruit guanábana. It’s difficult to explain the complex flavors of this tasty fruit, but I assure you, it’s worth trying not just in its original form, but also mixed into ice creams, pies and cakes.