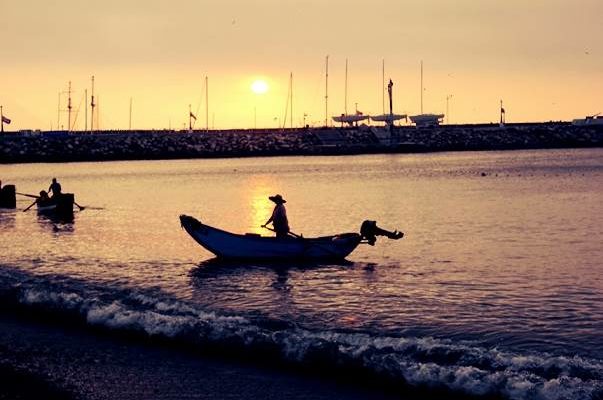 The most many tourists will ever see of Callao (pronounced: cah:YOW), a city 30-minutes outside of Lima, is from the air as they are flying into the airport. Among Limeños, the city doesn’t have that much appeal, often seen as a dirty, overcrowded suburb where people live but outsiders rarely visit – with the exception of one well-preserved area.

La Punta is one of the six districts that make up Callao. Wealthy Italian Peruvians initially settled La Punta, and their influence still shows in some colonial-style mansions with clay-colored roofs lining the streets. Nowadays, La Punta is a mostly upper middle class neighborhood that makes for a great day trip from of Lima. Stroll the streets, snap photographs and stand before some truly awe-inspiring architure at leisure as La Punta has virtually no crime due to intense crime prevention programs.

Near to La Punta and also worth a visit is Fortaleza del Real Felipe, or the Real (pronounced: RAY-ahl) Felipe Fort. You see, at the start of the 16th century, Callao was the door to the rest of the Americas as the city connected Spain with its colonies. Naturally, this attracted pirates hoping to loot the expensive European goods coming into the port and the precious metals leaving it. Spain built the fort to protect the city.

Today the fort still stands in all it’s glory. Guests can take a Spanish-language tour of the grounds, or wander them on their own. Be sure to climb the lookout for out-of-this-world views of the coast, port and surrounding city.

Speaking of the port, boat tours tours depart from it multiple times a day. The one-hour tour takes travelers through the marina and into open water where they can spot the president’s private island. There is also a four-hour tour that goes to Islas Palominos, an island where Humbolt penguins waddle about. Put on a wet suit and swim with the sea lions who seek attention from swimmers by barking at them.

Fisherman are up before the sun reeling in the catch of the day. For this reason, La Punta’s restaurants serve up some of the freshest seafood, with the most notable dish being ceviche. Many dish up a seafood menú – a meal of an appetizer, soup and entree for S/.10-15 ($3-6 USD). Alternatively, pack a picnic (or order one to go from a nearby restaurant) and dine on the boardwalk right in front of the sea.

Near to the restaurants are boutique shops specializing in everything from handmade to high-end clothes, decor and souvenirs. The beaches here are packed in the summer as the waters of the port are calmer than the Costa Verde in Lima. Unfortunately, they aren’t so great the rest of the year as the skies are grey and the water is quite frigid.

Neighboring La Punta is the quaint village of Chucuito. Italian immigrants also lived here as did fisherman. While the architecture is different than La Punta´s, it’s no less remarkable. Here, homes and businesses are built of wood, thatch and adobe and then painted vibrant reds and blue and greens. It is truly a spectacle to see.