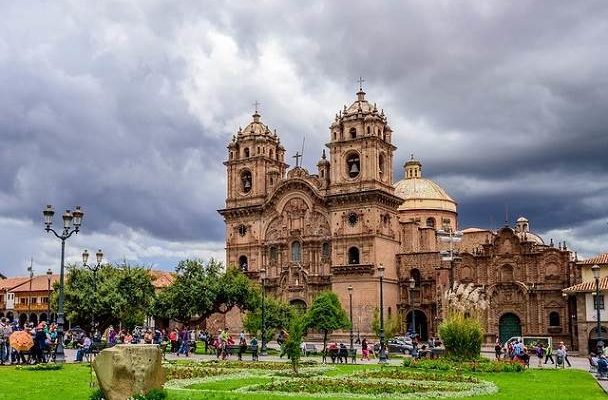 Seriously. One culture’s messy house pet is another’s roasted main course. You might want to avoid its eyes the first time, as it will be served with its face more or less intact.

2. Add water to the coffee.

Don’t be a hero, it’s not like sipping Italian-style espresso. It’s a velvety smooth party in your mouth. Try it like the Peruvians in Cusco do, with plenty of hot water or milk and some sugar.

Also called the menu típico or menu del día, this delicious option has several names. You’ll probably not finish the several courses you’ll get at a bargain price, but it’s a delicious way to sample traditional fare. You shouldn’t pay more than S/.10-15 and will probably pay less if you ask or look around. If you’re gullible and impatient you will probably pay more, but it’s bound to still taste great regardless of the price.

Oh, and when you ask for a menu you’re usually referring to the above; if you want to see a list of what is available, ask for “la carta”.

Except for tamales. Because “tamales dulces” are a gift from the Andes. Or eat the street food if you want to, since…

5. Something at some point will probably make you sick.

Your stomach, that is. Don’t be a hero, but don’t be a baby either because your situation is most likely like everyone else’s, or not nearly as bad as someone you’ll hear about. And if your case really is that bad, then you will become a legend and gain something from the experience after all.

Either way, get some help from the AMAUTA school’s office, take whatever pills, advice or both you’re given because you’ll feel better in no time, then go see some ruins.

Peru and the Cusco area has more to see than you can imagine. From ruins to natural beauty, history museums to art museums to markets. And of course the Inca Museum. From sites inside the city to Machu Picchu to the Nazca Lines, an endless wealth of sites awaits your hungry tourist eyes.

Don’t worry about seeming like a tourist; sometimes doing the touristy activities is really cool. Well in Peru you’ll be chevare, because that’s the word for “cool” in these parts.

But if something looks out of place and too good of a photo opp to be true, it is probably either awesome ruins or a peasant dressed in traditional garb carrying an adorable baby llama down a Cusco city street.

In the first case snap away until you feel you got the perfect shot. In the second case snap away if you want to, but the photos will cost you a few Soles. If you just can’t resist the shot of the peasant in traditional garb carrying an adorable baby llama down a city street, just pay up; don’t waste time pretending you didn’t fall for the street scam.

Don’t try to be some kind of (dizzy vomiting) hero. Take it easy for a couple of days when you get to Cusco, because it will make your stay all that much better. And try to resist those mouthwatering “pisco sours” and “cervezas” until you’ve at least slept through your first night at altitude. You might even want to ask your doctor for tips or pills before leaving your home country. Don’t worry, it’ll be confidential—he or she won’t tell anyone that you aren’t tough.

9. Practice your Spanish every chance you get.

The locals in Cusco are really good about not making fun of you until you are out of earshot. Sometimes they use big words that you don’t know but you’ll think they’re being nice because they smile a lot. Really, it’s win-win for you, will do wonders for your Spanish.

10. Seriously. Practice your Spanish a lot.

People appreciate your efforts and help you through your terrible Spanglish or Frenish or Alemanish, or whatever –ish you end up using at first. Then one day you’ll shock your socks off when you realize you just effectively used real Spanish phrases and real Spanish words on your entire visit to the San Pedro market, from purchasing “camotes” (sweet potatoes) to deciding whether or not to have “queso” on your “choclo” (mais).

Cusco is a pretty chill place, but it’s also full of tourists with big grins on their faces and big targets on their backs. From pickpockets to “brichero/as”, use your head. For example, don’t walk around with your passport and money pinned to the outside of your shirt. In fact, when you can, leave your passport safely in your hotel or residence and carry a photocopy instead.

No need to worry too much, but it’s a good idea to be smart and observant. Don’t pull out your best karate moves if someone bumps into you at the discoteca, but listen to your gut if it taps you on the shoulder. You’re probably on to something if that group of dudes approaching you on a dark street doesn’t feel quite right.

Not when you’re at a swanky restaurant, but street vendors and craft market salespeople expect you to, so give it a shot. Most stuff you see will seem like a bargain, but make an offer. They might say no, or they might laugh at you and flatter you with big words that you don’t understand, but you also might walk away feeling like you made a great deal for that alpaca sweater.