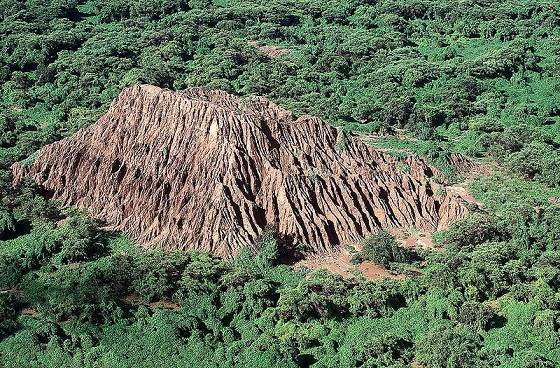 The great ruins of Batán Grande are located 18 miles (30 km) west of Ferreñafe in the Lambayeque region. The Peruvian people known as the Lambayeque who reigned over the region during the “Sicán Medio” period between the years 900 to 1100 C.E built the ruins to house the culture’s great elders of the northern desert. Later, the ruins would influence the Chimú civilization.

Composed of 17 stubby pyramids that reach heights of 98 ft (30 m), the ruins, because of their antiquity, are a great tourist attraction essential to the region. The great ruins of Batán Grande are also historically important as it is evidence that the Lamabayeque respected nature in the construction of Batán Grande. With this in mind, the ruins were built in harmony with South America’s greatest natural Carob Tree forest. Anthropology-wise, the ruins also helped establish the origins of the domestication of guinea pigs for livestock throughout the Peruvian culture.

Within the remnants of the ruins, the most sought out “huacas” (Quechua for revered monuments) are the Huaca Loro (the parrot’s huaca), the Huaca Tres Ventanas (the huaca of three windows) – this site’s importance is attributed to finding pre-Colombian Peruvian currency within its confines – and the Huaca La Merced (the huaca of mercy). All of these ruins were made of a mud and clay mixture, were important holy sites, and also contain evidence of an administrative culture.

Towards the last years of the Sicán Medio period, the Huaca de La Calera (the lime stone’s huaca) was converted into an administrative center. There, the huaca’s administration dealt with any business the Lambayeque conducted with the copper and metal works trade within the region.

Inkas is a tourist company that specializes tours into Batán Grande’s  entire splendor. Additionally, Inkas will take their guests to other northern regions of Peru like Trujillo, Chiclayo, the ruins of Chan Chan, and many more national parks. For those who wish to stay and get to know Peru’s old-world history, el Gran Hotel Chiclayo is a highly recommended hotel. It’s the type of hotel where one can relax and recover after long hours of trekking through the ruins. Additionally, the hotel offers complimentary tours of the region.