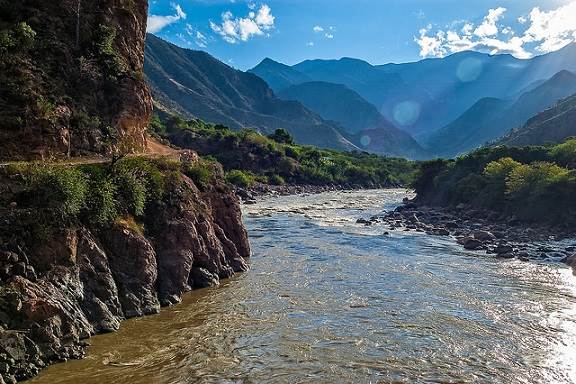 El Río Marañón (the Maranyon River) flows roughly north along the eastern edge of the Andes, turns eastward, is joined by five major rivers flowing southeast from Ecuador and many smaller rivers, including the Peruvian Utcubamba and becomes the Amazon. Just after the turn east is a stretch of narrow gorge (pongo) with 35 rapids in 35 miles (56 km). The final three cataracts (before where the river variously called Imasa or Chunchunga joins it and it becomes sort of navigable) are called the “Grand Canyon” of Peru.

Not that there is any lack of dramatic canyons in Peru, including the the Urubamba below Machu Picchu. The Marañonone is drier (more like northern Arizona) The elevation at the bottom (the grungy town of Balsas) is at 854 meters above sea level, the passes on the east and west sides roughly 3000 meters–to the descent and ascent is each roughly 9000 feet. The unpaved road is very rough, and if not blocked by rockslides (derrumbas — a good word to practice rolling one’s r’s on) it takes four-plus hours down and six up. For someone like me who grew up where it is flat and there are guard rails for any drops of over a yard/meter, the road with very frequent dropoffs of a thousand feet and no guard rails was terrifying.

After waiting hours for a part of the road to be excavated from a rockslide, darkness fell and the last hour and a half was through heavy fog. What with both fog and darkness, I could no longer see the dropoffs and kept my eyes tightly shut.

Before our progress was halted, I mostly looked across at the other side rather than down from the roadway. Building the road between Celendin (to the west) and Leymemaba (to the east) was an engineering feat, and, with frequent rockslides, maintaining it is difficult. Paved or smoothed seems too much to attempt or to hope for! (The roads between Cajamarca and Celendin and between Chachapoyas and Leymembamba are also dirt.)

The western side is dryer than the eastern. The west side is cactus desert. The lower eastern side has orchards (and mosquitoes and/or other biting insects).

On the west side we saw many vermillion flycatchers, a striped cuckoo, a southern beardless tyranulet, a tropical gnatcatcher, long-tailed mockingbirds, on the east a tropical peewee, a dull-colored grassquit and a bananaquit, a pair of hepatic tanager, and (my favorite, in part because it posed at length, a male yellow-tailed oriole) plus the common northern Peru birds (black vultures, turkey vultures, great finches, rufous-collared sparrows).

When we hit the road closure, our leade, Eric Horvath of Eric Horvath Nature Tours, went into a panic and wanted to go down to Balsas to try to find a place to spend the night. Having seen Balsas as we drove, and appalled at the idea of driving back down in the dark and then having to drive up again the next day, this idea was rejected by our group, though we were certainly not delighted at the prospects of spending a night in the van at nearly 10,000 feet elevation. The guidebook said that there are “what might pass for rooms” for rents in Balsas, which did not encourage going down and trying in the dark.

I thought that the Naranja Mecanica (Clockwork Orange) B&B in Celendin, a block from the central square (plaza de armas) was rather primitive, though the Dutch woman running it ensured cleanliness and good food (dinner, breakfast, and packed lunch). The seven of us in three rooms had to share one cramped shower. Fortunately, there was also a toilet downstairs, tucked under the stairs, shared with students who came to Narana Mecanica for English lessons with Dutch voluneers.

The Hospedaje less than a block from the central square in Leymemamba had rooms with private bathrooms and breakfasts including pancackes or scrambled eggs. There was even Internet access in town. Actually, I saw five “Internet” signs; at about 10:45 AM, three were above locked doors; one was in a cultural institute the door of which was not open. The one I used on the square–the only one with an open door– had slow connections and low prices (the equivalent of $.15US for 20 minutes).

The pizza restaurant was closed because the cook was ill, but we had dinner two nights on the square at a restaurant called Trunchas (I think–at least its name began with “Tr”), the owner of which was very glad for the unexpected influx of customers.

Just outside Leymamamba is the Museo Leymamamba about which I have written a separate posing. Further up in a gorge between high limestone cliffs that reminded me of Capri, we went birding and met indigenous Chachapoyans on mules or horseback. (Especially amusing was a woman with a large umbrella ready for use just behind her saddle. I wish that it had been raining so I could have seen her riding it with the umbrella up. I don’t know if she held it and the reins or had something rigged up to hold the umbrella shaft.)