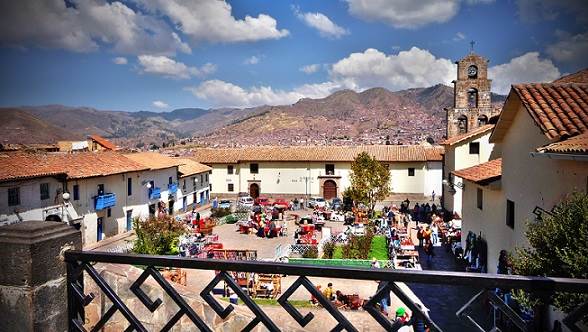 What is San Blas?
San Blas is a neighborhood that makes up part of the pedestrian tourist area which receives tons of visitors each year, not only because of the wonderful architecture throughout the area, but also for the beautiful craftsmanship expressed allover the neighborhood that just overflows from the creative hands of its inhabitants. It’s also here in San Blas, that you’ll find the most impressive pulpit in all of the Cusco region.

What makes this place important?
The importance of the neighborhood of San Blas emanates from its history, architecture and magic. Within the confines of the area, there is a church by the same name (Iglesia de San Blas), which is a catholic temple dedicated to Saint Blas. It’s said that the church was constructed over an Incan shrine or sanctuary, in which tribute was paid to Ilapa, the god of Thunder and Lightning.

It’s thought that the church first opened it’s doors in 1544, during the service period of the second bishop of Cusco – Brother Juan Solano…although, it is also thought that it was actually after 1559, during the rule of Viceroy Andres Hurtado of Mendoza .

At first, the walls of the church of San Blas were made out of adobe; but after the earthquake of 1650 the walls needed to be repaired and reinforced with stone supports, in order to prevent the same problem from reoccurring in case of any other natural event. It is widely accepted in the area, that the  church also contains the finest carpentry work of the Cusco region, especially the pulpit of San Blas, which was carved and sculpted from one solid piece of cedar wood over four hundred years ago. It’s assumed that this work was created by the hands of the indigenous people with great care and attention to detail.

What is San Blas like?
San Blas is really a magical neighborhood. From the moment you’re there you’ll be amazed by the narrow, cobblestonestreets that look as if they’re a complete zig zag maze by the many twists and turns they can take. Many of the homes are whitewashed with pretty balconies painted in blue and roofs of uneven slates. This unique charm is the reason why during the Colonial period, this neighborhood was very much appreciated.

It is maintained that San Blas, during the Incan era, was the settlement area for the mitimaes, whom were the artisans of this time and would ended up being sent to different areas, by order of the Incas for one specific mission: “Yachay” meaning, to “show and learn.” These mitimaes at some point arrived at T’oqokachi  (T’oqo meaning “hollow” and kachi meaning “salt”), which is the original name of the San Blas neighborhood. Their purpose here was to show and teach their art to the local goldsmiths and silversmiths whom themselves were part of the Chimu culture; ultimately teaching them techniques for plating and veneering which they then used to make sculptures out of gold. These techniques were eventually used in the construction of Koricancha (an Incan temple).

Due to all of these events and it’s rich history since the time of the Incas to modern day, San Blas is a neighborhood brimming with art and culture. It’s mainly inhabited by artists and creative types that do great work with carving and sculpting out of silver, gold and stone which turns into fine sculptures, handmade dolls, masks and practical ceramic pieces, among other objects.

How to get there?
The San Blas neighborhood is located four blocks away from the Plaza de Armas in the city of Cusco and from this starting point, it shouldn’t be more than a 15 minutes walk. Also remember, that it’s possible to visit the markets and fairs  placed by the artisans of the neighborhood in the plaza of San Blas. It occurs continuously, every Saturday starting at 9:00am and ending at 5:00pm.