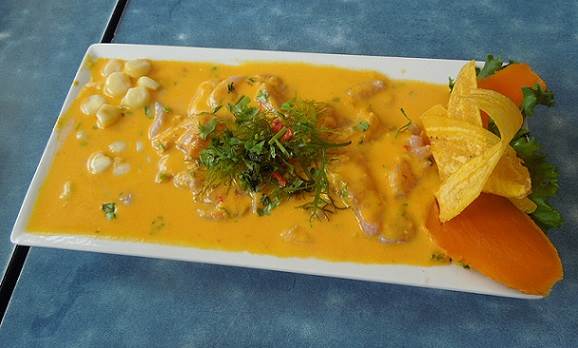 The Fish Tiradito is another one of the dishes that delight the palate of the tourists when they arrive in our country.  In spite of its apparent simple-mindedness preparation, it carries a vast cultural background that makes it more than delicious: historic. Its preparation is very similar to the ceviche, flag dish of Peru, but with a light difference: the type of meat cut is not done in squares and the soaking in lemon juice, which cooks it, is different.

Its origin is found in Pisco, port of the department of Ica, six hours of Lima on bus. Though it is similar to the ceviche, this continued the Japanese tradition of food preparation, that is to say: resembles more the sashimi, but with the difference of the elements that make it up.

To prepare it, the fish is cut in fine sheets, which should have a thickness sufficiently thin so that they could be cooked not only by the lemon juice, but by some extra spice, the Peruvian chili.

Nevertheless, specialists in the history of Peruvian gastronomy have fund that the tiradito and the ceviche are not dishes created during the era of the Virreynato, but they came since the Inca era. Although the gastronomy of the Tahuantinsuyo was based chiefly in the cultivation of the potatoe, the efficient road system and couriers made possible that the fresh fish that was fished in the morning on the Peruvian coast arrive at the table of the Inca in the afternoon and this can taste it. In the north of Peru, the fishing places of long ago par excellence, the fish was filleted by the machete of the fishermen, which permitted its better conservation. It was served alsmost raw with lemon juice.

At present, thanks to the Japanese immigrants, the tiradito evolved to adopt the forms of the sashimi, which has a different form from preparation. In it, is the cook that handles the art of cutting the fish.  In this way each fish will be cut in a different form to take maximum advantage of its texture and flavor, which will depend on the type of final presentation.

In the tiradito, the cut of the meat is homogeneous and maintains its history: it is served on the tables with white tablecloth with the same archaic formula: in juice of spicy lemon.