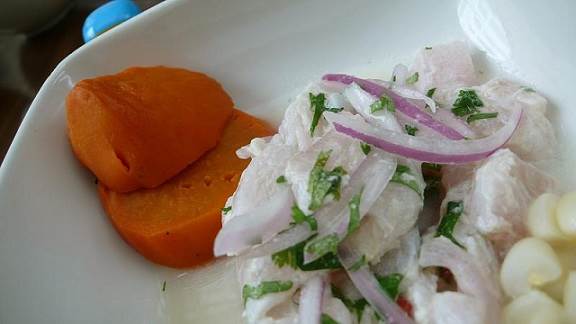 The popularity of Peru’s cebiche, a seafood cocktail in which fish and shrimp are cured in lemon juice, reaches world fame heights because of its overall texture and tradition. As a result of this, cebiche has become the flag of our Peruvian cousin and is an absolute iconic dish throughout all of Latin America.
Cebiche is also plays an important role in the food cultures of Ecuador, Mexico, Chile and Costa Rica all of which have donned their own versions and tweaks of the Peruvian dish.  Though spelling may differ (seviche, ceviche, or sebiche), the origins remain the same rooted in Peru.

Different Histories, Only One Name

Maybe there was a mix-up in the spelling of cebiche at some point in time. Or some type of confusion. What remained constant was its pronunciation.  The difference of spelling has many different theories of origins. Some make sense, and the others don’t. Those who looked into the name have traced it back to English sailors arriving at port Callao. Upon tasting the lemon cured cocktail, the sailors called it “Sea Beach” as they ate the dish at the beach’s edge. Another theory to its name is attributed to some ingredients in the dish: fish cured with lemon and onion which is commonly known as “encebichado.”

Another side to the theories has to do with another language.  In Arab, “sibech” denotes high acidity foods.  How could a word travel such distances? The theory suggests that imprisoned Moors that accompanied Pizarro’s army cooked fish with bitter oranges and limes.  Thus, the word for a sour and high acidity food stayed in Peru.

Now, the most widespread theory, by Carlos Raffo Dasso, suggests that the name cebiche came from the signature spicy taste of the cocktail. Europeans were not accustomed to Peruvian seasonings characterized by the aji pepper and lemon.  Upon tasting these ingredients, the unaccustomed pallets of the Europeans burned and they yelled “Son of a bitch!”  The natives not knowing what the Europeans were saying, interpreted their words as “un sebiche” or “a sebiche.”

Finally, Historian Javier Pulgar Vidal affirms that “seviche” is the name and correct spelling of the cocktail. It comes from the Chibcha language (a language that was spoken from Panama to Colombia and all of northern Peru) word “viche” which means fresh fish. His basis relies heavily on a 1820 song known as “La Chicha” in which contains the word:

“Let the sebiche come and the roast follow
let them come with life that will overexcite us into a drink.
All natives loose not your grip on your potos
because all tyrants must come to be detested.”

This song includes all of the traditional components of serving the dish. Guatia is a type of roast cooked with herbs that usually accompanies cebiche.  Poto is a cup that is made from the shell of pumpkins and has beene traditionally used by the indigenous people of Peru.