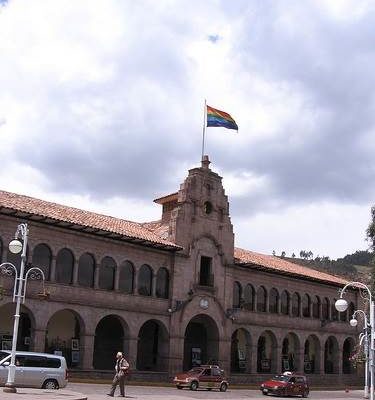 The city of Cuzco’s current flag is composed of different stripes that range from the colors red to violet: the whole spectrum of the rainbow. This flag was adopted as such due to the fact that it was the flag of the Inca empire, however, diverse studies have demonstrated that the Tahuantinsuyo did not posses any flag, since the concept as we now know it comes from the European perception representing the symbol of a country.
The best font of history about the Incas that have reached our hands has come from the part of the Spanish chroniclers, who collected the stories told by the Indians, since the Incas did not possess writing. From them we can surmise that the Empire did not have any national flag but there did exist banners of colors that the Conquistadors assumed were the symbols of their homeland. Every Inca had a different banner that represented him and not the Empire.

Before the arrival of the Spaniards, the civil war between Huáscar and Atahualpa ended with the latter’s victory. Within this political context, the Spaniards stepped onto Peruvian lands and with first contact that they had with the natives managed to revive an old Inca legend. In it, the god Wiracocha, a man with a white complexion and a large beard, left by ship towards the north, promising to return when a more powerful Inca would ascend who would govern the world.

Seeing a great similarity in Francisco Pizarro to the man spoken of in the legend, Atahualpa believed that he was the designated one, so he exercised the old Incan custom of erasing from history all negative events that have occurred, including stories and objects. The banners of the ancient Incas, who were preserved by their descendants, ran the same fate. After the conquest and the subsequent Spanish domination, the natives never remained in silence. In the XVIII century, a descendent of the Incas, Tupac Amaru II, organized a great rebellion that put Spanish domination in the Southern Andes in check. After being placated, it was decided that all customs that would bring to mind the Incan past would be eliminated. This measure stayed in effect until the end of the Viceroyalty of Peru.

After various decades after the Independence of Peru, the millennial customs of our Peruvian past started to be revived, for which it was important to recreate many cultural symbols. This is where the rebirth of the celebrations of the Inti Raymi and others that belong to Peruvian folklore began.

The Cuzco flag was created, as such, in 1978, after a contest organized by a local radio station. This new symbol, that attempts to encompass the rich history of the Empire, was inspired in a wiphala, an Aymara word that means “banner”, which possesses seven colors and has a square shape. Under the tourist influence, the Cuzco flag is no more than a modern symbol that revives our past, but that has no comparable historic substance.