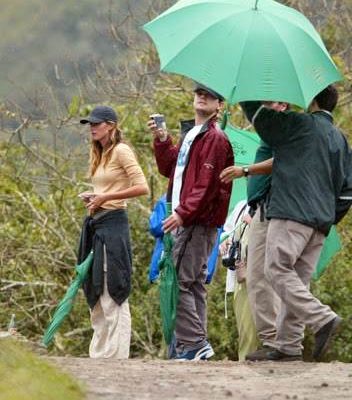 In 2003 begin the parade of celebrities to Machu Picchu. In December of that year, the movie star, Leonardo Di Carpio and his partner at the time, the model Giselle Bündchen, fulfilled the dream of meeting the main archaeological complex of America. While the weather was adverse to them, toured the place completely amazed. Four years later, in 2007, Peru was visited by great personalities of international celebrity. In June came the singer Olivia Newton John, actress Cameron Diaz and billionaire Bill Gates, who decided to learn about the ancient culture of the Incas, attending celebrations of Inti Raymi.

Oscar winner Adrien Brody and his new partner of the time, the Spanish actress Elsa Pataky, came to the archaeological site and then headed to the resort of Mancora for her part in the film of the same name. The singer of “Rabiosa”, Shakira, also paced the historic Citadel, chewed (“Chacchar”) coca and said: “It’s something I can not believe my eyes. This is unlikely, almost impossible. ” That same year, Princess Beatrice of England, and American actors Woody Harrelson and Owen Wilson also toured our wonderful holy city. The 2008 was no exception, as the singer and songwriter Alicia Keys, Grammy winner and Billboard, received the New Year in Cusco. Also, Jenna Bush, daughter of outgoing U.S. President George W. Bush, arrived in January of that year to the Imperial City amid tight security, as part of his agenda in favor of children, in coordination with Unicef.

The Infanta of Spain, Margarita de Borbón, visited Cusco in April and enjoyed a performance of folk music and flamenco before departing by train to Machu Picchu. Days after the Canadian singer-songwriter Bryan Adams, after providing a concert in Lima, arrived to Cusco in a private plane and then a helicopter enrumbó into town discovered by Hiram Bingham. Between May and November, on the occasion of the V Summit of Heads of State and Government of Latin America, the Caribbean and the European Union (ALC-UE) and the Forum of Asia Pacific Economic Cooperation (APEC), made in our country, various foreign authorities visited the city of Cusco and Machu Picchu. Finally, in July, the captain of the Spanish national team, Iker Casillas, visited her in the company of a group of abandoned children whom they support through an NGO. Casillas took the opportunity to play a game of foosball with minors. Machu Picchu was also “visited” this year for The Simpsons and South Park. The “yellow family” arrived in the ancient citadel with a new prank Bart, while the characters of South Park did during a trip to Peru to control an attack of “giant guinea pigs.”

Actress Lucy Liu and director Ron Howard were also delighted with this wonder of the world by 2009. The “Charlie’s Angel” arrived to Peru in August as a goodwill ambassador for UNICEF, while the director of “Angels & Demons” came in June.
In April 2010, Susan Sarandon came as part of the campaign Cusco Pone, Prom-Peru, intended to boost tourism in the area after it closed temporarily by heavy rains and landslides entrance to Machu Picchu. The actress was the center of attention and the picture of his visit was front page of several newspapers Lima.

In March 2011, actor Richard Gere arrived in Cusco soil. Despite the bad weather, the actor, his wife Carey Lowell and son Homer toured the archaeological site.

One of the latest to join the list of celebrities who chose the citadel as a tourist destination was the actor of the movie “The Mask”, Jim Carrey, who did not fail to marvel at the sanctuary. In his Twitter account posted pictures and described as “inca reíble” our world wonder.