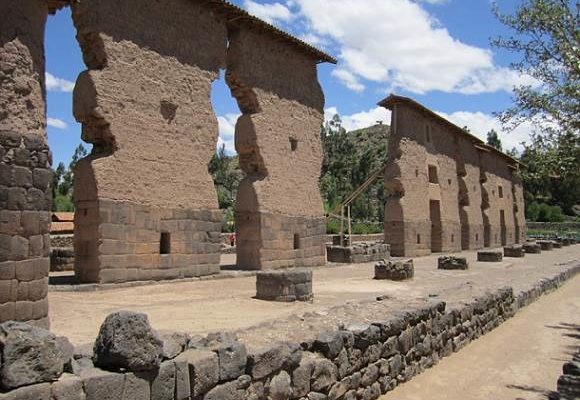 If you’re planning a trip to Peru anytime in the near future, you’re almost certainly stopping for a visit to Machu Picchu, the famed Inca city recently crowned one of the Seven New Wonders of the World.

But there is much more to discover about Inca culture, architecture, and infrastructure than a mere visit to Machu Picchu will provide.

If you’re crunched for time, but want to fit in a few more awe-inspiring Inca ruins, we recommend including the following three sites in your visit to Peru. They don’t require nearly as much time to visit as Machu Picchu, they’re easier to reach, and the best part — you may have already paid for them anyway!

The ruins at Saqsayhuaman (also spelled Saqsaywaman) tower above the heart of Cusco, providing excellent panoramic views of the entire city and the surrounding mountains. Although its name means “satisfied falcon” in Quechua, it is playfully referred to as “sexy woman” for its auditory resemblance to this English phrase. But these ruins are definitely nothing to joke about …

The structure, if it remained in-tact in its entirety, would rival Machu Picchu in both size and grandeur. The Incas, led by Manco, nearly defeated the Spaniards in a desperate attempt to reclaim Cusco in 1536. Their attempt failed and Manco was forced to flee to Ollantaytambo. Unfortunately, shortly after conquering the Incas, the Spaniards removed many of the stones to use for their own buildings so the site is not nearly as impressive today as it could have been.

Saqsayhuaman held both religious and military significance for the Incas.  It’s three-tiered zig-zag stone structure makes its walls nearly impenetrable. Many of the blocks are taller than a person, and the carving is incredible. There are places where the stones have been restored, but the majority of the site is original. The uniquely carved stones still fit together perfectly without the use of mortar.

The site is divided into three sections: the zig-zag tiered fortification; the Rodadero, a hill opposite the tiers that once held three towers, likely used for water and food storage; and the open green between these two structures that is now used for the Inti Raymi, the festival of the sun, celebrated each June 24th to mark the winter solstice and honor the Inca sun god, Inti.

Saqsayhuaman represents the head of the Puma — the shape that Inca Pachacutec had envisioned Cusco to resemble.

To gain admission into the ruins, it’s best to purchase the Boleto Touristico, which will get you into this site, as well as 15 more throughout Cusco and the Sacred Valley. To reach the ruins, head out from the northwest corner of the Plaza de Armas and meander up several steep side streets. Plan for at least an hour to explore the site.

The quaint village of Ollantaytambo is located about 40 miles from Cusco in the Sacred Valley.The town itself is a living example of Inca life, complete with its cobblestone streets and irrigation system running through the streets of the town. The town was established by the Incas in the 13th Century.

The ruins overlooking the town were the site of one of the greatest Inca victories in history. After the defeat at Saqsayhuaman, Manco Inca and his forces fled to Ollantaytambo, determined to defend the empire to the end. Hernando Pizzaro and a force of about 70 Spaniards followed, but were overwhelmed by the force of the Incas from atop the fortress. They retreated in defeat. The Inca victory was short-lived, however, when the Spanish regrouped and returned in greater numbers, defeating the Incas and forcing Manco to flee to the jungle refuge of Vilcabamba.

Although it is famous for being the site of these important battles, Ollantaytambo served more as a temple than a fort. Its perfectly designed terraces served a vital farming role for the Incas, and its ceremonial center at the top of the structure held religious significance to the Incas where there is a Temple of the Sun.

On the Temple Hill stand  six stone monoliths, left unfinished for reasons archeologists and historians still speculate. The slabs show patterns of the Inca cross — a design that shows the three levels of life, according to the Incas: the underground (represented by the snake), the present life on earth (represented by the puma, hence its recurring presence in Inca society), and the heavens, or the afterlife (represented by the condor).

In addition to the Temple and the terraces, other components to the site include: the Royal Hall; the Princess’ Baths; and the Intihuatana, which was used to trace the sun’s path.

Admission to the ruins at Ollantaytambo can be accessed through the Boleto Touristico. We recommend allowing at least two hours to explore and absorb the whole site, though we took nearly three. It’s worth planning a whole day in Ollantaytambo to explore.

After you explore the ruins, take a walk through the town. You can relax in the Plaza de Armas and stop in to the Town Hall, where there is a photo exhibit honoring the history of Ollantaytambo. If you have time, you can also walk to the Inca Bridge, located at the entrance to the town, and continue on to the Inca quarry (6 km), where the Incas obtained the stones used to build the site. If you’re headed down to Puno/Lake Titicaca from Cusco, it’s worth a brief stop at Raqchi, located just over 70 miles from Cusco. This site is interesting because it is made of both stone and adobe (mud bricks). Twenty-two stone columns once supported the Temple of Viracocha and what was thought to be the largest-known Inca roof. The foundations still remain today, though much is thought to have been destroyed by the Spanish.

You can stroll the grounds and admire the Inca homes and Colcas (used for grain storage) as well. You can buy a ticket for just a few dollars at the entrance to the site. We recommend an hour and half to explore the site.

Before you leave, take a few moments to browse the local handicraft booths, walk around the village, and check out the small cathedral. It’s a glimpse into rural Peruvian life that’s worth a brief stop along your journey.