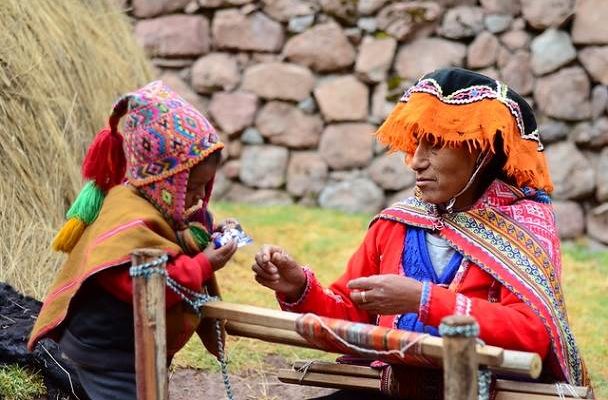 While Cusco has become a cosmopolitan hub – one that overflows with jet setting travelers, luxe hotels and restaurants owned by renowned chefs – the mountainside that surrounds the former Inca capital tells a completely different story. There, life has changed very little during the last several centuries. Villagers still live off of the land, growing and raising nearly everything they eat. And, men and women still shepherd their sheep, llama and alpaca through verdant fields, cook meals over an open flame and participate in a tradition as old as the civilizations that make up Peru – Andean weaving.

Fast forward to about a century ago, and the art was made easier than ever before as chemical dyes and machines took the work out of weaving, allowing Andean villagers to make textiles in a fraction of the time. While efficiency was gained, the tradition that held these tight-knit communities together went nearly extinct.

That’s when Nilda Callanaupa decided to step in to bring these living traditions back from the dead. Andean born and Quechua speaking, Nilda runs el Centro de Textiles Tradicionales de Cusco (the Center for Traditional Textiles of Cusco). Together she and business partner Jim Kane, the founder of Culture Xplorers (a sustainable travel agency based in the United States) decided to create The Weavers Awards. The yearly contest that would not only acknowledges the craftsmen and women, but also resuscitate the millennium-old tradition of naturally dying and hand weaving the bright and ornate fabrics. Looking back, both Nilda and Jim admit it was a pipe dream with a six-figure price tag, and while the odds were against them, it paid off.

I recently attended the 10th year of The Weavers Awards where I witnessed something that can only be described as magical. The tradition of villagers sitting in a circle and weaving together folkloric stories on massive blankets was not just revived; it was thriving before my very eyes. Once a year, 100 or so villagers from the Andean highlands traverse rugged landscapes to arrive in Chinchero where they show off their wearable works of art. Winners receive cash prizes, some of which are the equivalent of several months’ salary.

In a region of the world where people routinely remember their ancestry, the weavers are returning to their roots, making the pieces in the same way their Wari and Inca mothers and fathers did.

Nowadays they sheer their livestock, spin their wool, dye it using only natural plants and weave together intricate clothes, throws and decorations. Being recognized, appreciated and paid for their hard work not only creates value in their weavings, but also in themselves.

This, Nilda told me this is what can’t be bought with money. Both men and women feel proud and valuable and worthwhile. Museums in faraway places put the fabrics on display, and collectors snap up anything they can get their hands on. Nilda also showcases the best items in the CTTC museum in Cusco, where visitors from every corner of the world get to see them.

Looking back, I realized just how lucky I am to have been able to shake the immensely talented hands that wove together the intricately detailed textiles – fabrics, that like those who created them, are complex and vivid and beautiful.