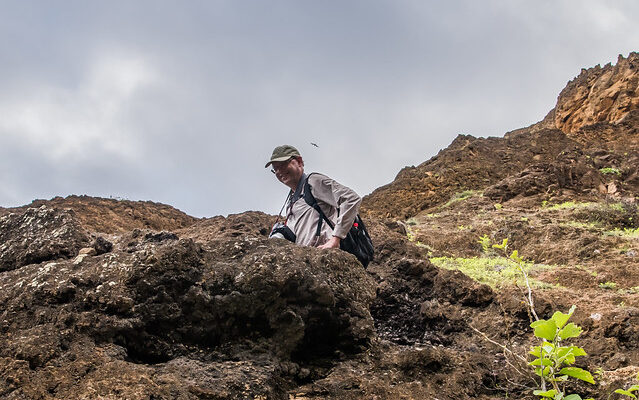 The first time I went to the Galapagos Islands, I was underwhelmed. It seemed a lot like Hawaii, only further away and a lot more expensive. Maybe it was because I took a cruise and we spent most of our time on the boat. Sure we had twice daily excursions. But, the process of getting ready for and traveling to and from our excursion location seemed to take almost as long as the actual excursions themselves.

Plus, it wasn’t so much fun to follow our guide like a group of eager school children, straining to hear his explanations and worrying about getting in trouble for wandering off.

The second time I went to the Galapagos Islands, I did an island hopping adventure that gave me a chance to really see why the islands are so special.

Here are seven reasons the Galapagos Islands should be on your bucket list and why I am glad they were on mine.

7 Weird Animals You Can See on the Galápagos Islands

1) Blue-footed Boobies. The bluer their feet, the more attractive they are to the opposite sex. In fact, the male performs a courtship dance that is designed to show off his blue feet. When blue-footed boobies become exhausted from raising chicks, the blue of their feet fades. Once they kick those chicks out of the nest though, watch out because the blue returns in all its original vibrancy.

2) Marine Iguanas. These Godzilla-like creatures are the only members of the typical landlocked lizard family that can swim and forage for food in the ocean. It also turns out that they can shrink. When the algae they feed on became scarce one year, they lost half their body weight and a quarter of their length. Scientists postulated that they somehow absorbed part of their skeleton. Stranger still is that they re-grew to their original size once algae became plentiful again.

3) Flightless Cormorants. The Flightless Cormorant is one of the few birds that have lost their ability to fly. Their wings and tails have atrophied, while their long necks, strong legs for kicking, and large webbed feet have made them worthy predators of fish that swim in the shallow water just off shore.

5) Lava Lizards. The male of this species is the Arnold Schwarzenegger of the lizard world. They constant do push-ups, possible to regulate their body temperature and defend their territory.

6) Frigate Birds. These fish-eating birds are in a bit of bind because their feathers are not waterproof. Since they can’t dive for dinner, they must resort to stealing other species’ food. They have even been known to swoop in and steal food right out of a chick’s mouth.

7) Giant Tortoises. The granddaddies of the Galápagos, these tortoises enjoy a life span that surpasses our own. While not in any official record book, stories circulate of tortoises that are more than 200 years old.

9 Cool Things to Do in the Galapagos Islands

Here are 9 really cool things you can do during your trip to the Galapagos Islands.

1) See giant tortoises up close in the wild. Look for them in patches of tall grass or partially submerged in mud ponds.

2) Explore ancient lava tunnels. Lava tunnels, or tubes, are created during volcanic eruptions when lava flows beneath the surface which has cooled and hardened. Many of these tunnels are now inactive, making them both safe and interesting to explore.

4) Dodge colonies of spitting marine iguanas sunbathing on the sand. Marina iguanas spit, or sneeze, as a way to excrete the salt they swallow during their daily ocean swims.

5) SCUBA dive or snorkel with sea lions, sea urchins, sea turtles, and other creatures of the sea.

6) Hike through a jet-black field of petrified lava at Sierra Negra.

7) Swim with sharks through the gap between skyscraper high rocks at Kicker Rock.

8) Spot Galapagos Penguins waddling on the beach at Las Tintoreras.

10 Do’s and Don’ts on the Galapagos Islands

The pristine paradise of the Galápagos Islands has been under siege since pirates first arrived in the 1700’s. Along with the pirates, came goats, pigs, donkeys, dogs, cats, and rats. They trampled the delicate native plants, gobbled up turtle eggs, staged inexplicable attacks on land iguana colonies, snacked on baby chicks, and tore through cactus tree trunks.

Now, tourism is the latest threat to one of the most unique places on the planet.

Here are 10 do’s and don’ts from the Galápagos National Park Service to help you preserve and protect this amazing natural wonder.

1) Do stick to designated paths to avoid trampling delicate plants, some of which only grow on the Galápagos Islands.

3) Don’t get too close to the animals. According to park regulations, you must maintain a distance of 6 feet from any animal. This is for your safety and theirs. It’s hard not to take advantage of the animals’ seemingly tame nature to sidle up a little closer. But, they are wild animals and they can hurt you.

4) Don’t feed the animals. They have plenty to eat.

5) Do pack out what you pack in. Save your trash until you can find a trash bin to throw it in. And, it is absolutely forbidden to sneak behind a bush to use the “natural” bathroom.

6) Do cooperate with the quarantine regulations when you fly to the Galápagos Islands. Leave plants, animals, and food at home.

7) Don’t smoke. In the arid environment in the Galápagos Island National Park it is too easy to start a fire that would devastate the landscape. You can smoke in the small towns that dot the islands, though.

8) Don’t take anything home. This includes rocks, shells, and souvenirs made from a banned item such as coral shells, lava rocks, sea lion teeth, and tortoise shells.

9) Don’t write or carve anything on tree trunks, rocks, or anywhere else. You can only imagine what the Galápagos Islands would look like if everyone did this.

10) Finally, avoid using Flash when taking pictures. Having a light go off in their eyes has a way of unsettling the animals.