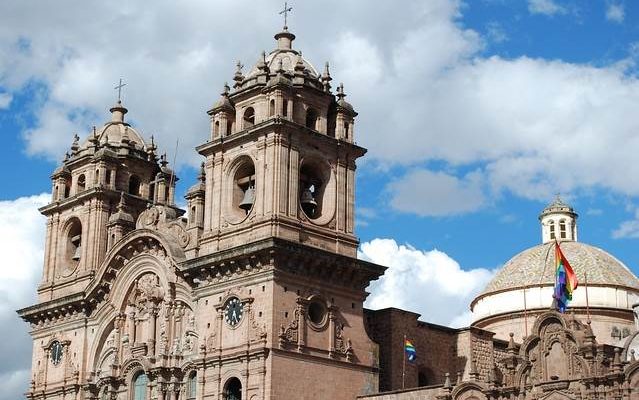 Although I am more of a spiritual person than a religious one, I keep finding myself visiting the colonial cathedral of Cusco. In fact, during one visit I spent four fascinating hours in the cathedral. I wasn’t attending Mass, praying, or counting rosary beads. Instead, I was exploring secrets hidden in plain sight with a local art expert.

Designed by a Spanish conquistador and architect, the cathedral of Santo Domingo is built on the foundation of Inca ruler Viracocha’s palace. Most of the stones for Cusco’s cathedral come from the sacred and military site of nearby Sacsayhuaman. And, when the Spanish learned that the sand in Cusco’s main square was considered sacred, they used it to make the mortar that holds the cathedral together. During the nearly 100 years that Cusco’s cathedral was under construction, Spanish priests and architects supervised mostly forced Inca labor.

Both the location of Cusco’s cathedral and the manner in which it was built were intended to stamp out the Andean religion and replace it with Spanish Catholicism. Surprisingly, though, the Incas found ways to incorporate elements of their spiritual beliefs into the artwork that adorns the cathedral and into the very building, itself, all right under the noses of their Spanish taskmasters.

When you visit Cusco’s colonial cathedral, look for these signs of Inca rebellion.

1) The Last Supper. In this exquisite painting you will see Jesus and his Disciples sipping chicha, a local corn-based beverage, and feasting on roast guinea pig, a typical Andean meal.

2) The Virgin Mary. The painting of the Virgin Mary features a suspiciously full skirt. In fact, the skirt looks like a mountain! The Incas considered mountains to be gods.

3) Llamas. Look for llamas shooting out of the halos of some saints. The Incas painted llamas instead of flames. The Spanish word for flame is llama. Was it a simple misunderstanding or something more?

4) Pillars. Look closely. The pillars that support the cathedral are in the shape of an Andean cross – a chakana.

5) Pumas. The head of a puma is carved into the door of the cathedral. In the Andean religion, pumas are the rulers of life on the second of three levels.

6) Snakes. Look for a wavy border that decorates the hem of some of the saints’ skirts. This wavy border actually represents a snake – the ruler of the underworld in the Inca religion.These are just a few of the secrets hidden in Santo Domingo cathedral in Cusco. If you enjoyed this article, get email updates (it’s free!)