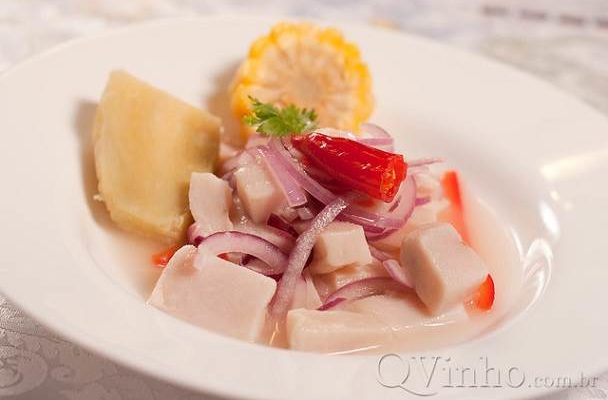 In Peru, ceviche is a traditional dish, widely consumed and highly valued,  be considered formally as the nation’s cultural heritage. Its history dates back to pre-Columbian times. The dish is served in a restaurant known as cevichería.

In ancient Peru, at the time of the Mochica culture, for two thousand years of they prepare this dish of fresh fish cooked with the fermented juice of lurch (Passiflora tripartita var. Mollissima), a fruit of local origin. During the Inca Empire, fish was marinated in chicha. Different chronicles report that along the Peruvian coast consumed raw fish with salt and pepper.

Subsequently, the Hispanic presence added two ingredients of the Mediterranean culinary custom: the lemon and onion. The development of the lemon in Peruvian soil, got to shorten the time of preparing this pre-Inca and  ancestral dish.

Juan Jose Vega in his book indicates that Moorish women who  arrived with Francisco Pizarro added the bitter orange juice, chillies, fish and local algae creating  in a new dish called sibech, which in Arabic means “acid food”. The researcher Jaime Ariansen in 1820 indicates that this dish is mentioned in a popular song entitled “Chicha” that  the  independence soldiers sang: “The Sebiche, then comes the Guati, which also invites and excites to drink …. ” This song was written by Jose Bernardo Alcedo, José de la Torre Ugarte, authors of the country’s national hymn.

During the nineteenth century “ceviche” was spelt with “s”.

Manuel Atanasio Fuentes wrote an article in 1866 that “national Meals are highly spicy taste with much pleasure the plebs … but the spicy, spicier, more tears pull  out (after jealousy) is the ceviche. The same author had already stated in a chronicles in 1860 the preparation of ceviche was done then with pieces of fish, chili, salt and bitter orange juice. Further evidence  is presented by Juan de Arona, who in 1867 wrote the following verse: “Shall my muse sing / sing at least, / In a timely speech, / The pleasures of spicy / and the Peruvian ceviche?