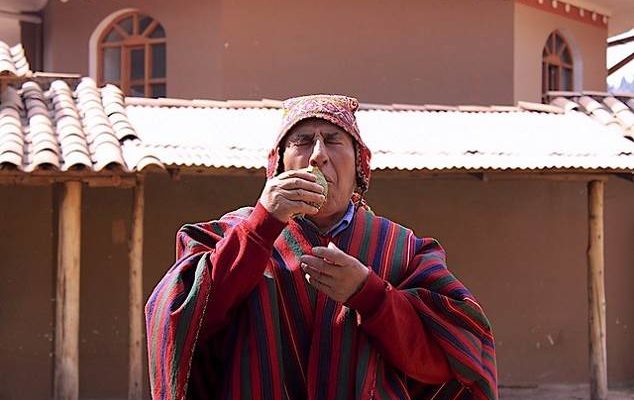 I looked up startled by the sudden sound of an avalanche cascading down the slope of a distant mountain. The shaman smiled. Apparently, the avalanche was a sign that the apus, or mountain gods, were accepting our offering.

I was high in the Peruvian Andes participating in a horseback trek that would cross the Salkantay Pass at over 15,000 feet before descending through a cloud forest and into the Amazon jungle. This was the first horseback trek of the year, so the outfitter had arranged for a shaman to make an offering to the apus to ensure a successful season.

The shaman and his assistant had arrived at our lodge the evening before the trek. They both wore Peruvian style hats and thick alpaca ponchos. I saw the sleeves of a modern Gore-Tex jacket peeking out from under the assistant’s poncho, though. A mix of ancient traditions with modern style is becoming more and more common as an increasing number of international tourists visit the area.

In the morning, we rode our horses to a trail that led to a glacier-fed lake. Since the trail to the lake was too steep and narrow for the horses, we dismounted and hiked the rest of the way.

As we crested the hill, a Caribbean-blue lake came into view surrounded by glacier-iced mountains. The shaman and his assistant waited for us on the shore.

I sat on a flat rock and watched as they prepared the offering. The shaman spread a colorful cloth on the ground to serve as an altar. He then placed a white piece of paper on top of this altar. Both the shaman and his assistant then removed several meticulously wrapped packages from beneath their voluminous ponchos. As they unwrapped each package, I saw several objects such as coca leaves, corn, cookies, shells, and beads. The shaman placed each object precisely on the white paper.

The shaman then circled the individual offerings with cotton that represented clouds and carefully folded the cloth over the entire offering. He rose slowly and went to each of us in turn, bowing low to offer individual blessings.

As the shaman finished the blessings, our guide pointed to three Andean condors circling above. Shamans believe birds are messengers. So, hopefully the birds’ presence boded well for the success of the season.

The shaman and his assistant gathered the cloth-wrapped offering and made their way to a stack of brittle kindling beside a large rock. They quickly started a fire and reverently placed the offering in the flames.

As we rode back to the lodge, I reflected on how deeply connected to nature the offering made me feel.