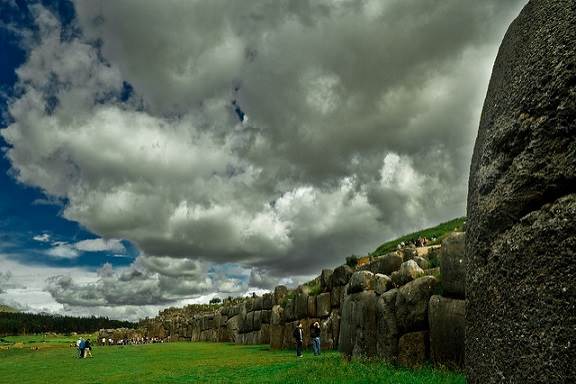 Sacsayhuamán, is a fortress whose name comes from the aimara voice saqsaw “place of fulfillment”, and waman “hawk”. It is because of this that it is giving the meaning of “place where the hawk is fulfilled”, this fortress enjoys breathtaking architectural works, since it has been edified of very gigantic stones, united in such a mastery that a needle would not fit in beween them.

Where is it  located?
This fortress is located to 2 km from the city of Cusco, to 3700 msnm and has an extension of 3093 hectares, and is surrounded by the Ausangate, Pachatusán and Cinca mountains, being bathed by the waters of the Tullumayo river.

Why is it important?
Sacsayhuamán, enjoys a beautiful landscape that is accompanied by an incomparable flora and fauna, among which are emphasized the llamas and the hawks; moreover every 24th of June of every year it is celebrated in this place the Inti Raymi, a cult celebration to the Inti of God Son, maximum God to the Inca empire. How is it?
It is a about a fortress that begun its construction in the fifteenth century, in the government of Pachacútec; while it was in the XVI century, with Huayna Cápac, that the final touches were given to this monumental architectural work.  This building has been built out with gigantic stones, that make educators ask themselves in present times how is it that the Inca made the transfer of these from one place to another.

In the walls of Sacsayhuamán can be found images worked by the Incas, there are also chicanos or subterranean entrances to the tunnels, amphitheaters, and constructions clearly rituals, that apparently have relation to the worship of water.

There have been found warehouses of food and weapons, and channels from which water was distributed.  Also, the throne of the Inca is found located next to the fortress and is composed of an immense rock, that has been polished in various levels.  It is presumed that from this throne the sovereign presided the ceremonies and events, giving orders from right there.

The monument that can be observed currently constitutes only 20% of the consruction that was centuries behind, given that the Spaniards in the time of the Conquest, disarmed the walls and towers to avoid uprisings against them.

How to arrive?
In this fortress you could take photographs, a walk, meditate and discover more about the Incan culture.  You could arrive on foot or automobile, as you wish.

On foot you could arrive by three routes: