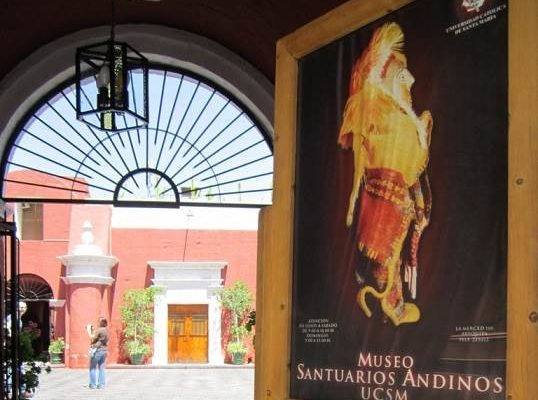 Juanita, she’s called. But Juanita is not just your average mummy. In fact, she’s one of the most famous mummies in the world and one of the most popular attractions in Arequipa, Peru.

So who is Juanita, and why is she so famous?

Juanita is one of the most well-preserved mummies in the world. She was discovered by anthropologist Johan Reinhard in 1995 — an estimated 500 years after her death — atop Mt. Ampato in southern Peru, wrapped in alpaca wool near the top of the 20,700 ft. peak.

But perhaps the most significant fact about Juanita is that she was just a child, likely between age 13 – 15 at that time of her death. She is one of 18 frozen bodies of children that have been found in the Andes region. Juanita is perhaps the most cherished of these children, as she is believed to have been an Inca princess and was the only one to be buried on the summit of the volcano.

Juanita and the other children were among dozens of children selected at a young age, perhaps even before birth, to be raised as eventual sacrifices to the Inca gods. Families would have considered it an honor to dedicate the lives of their children to such a cause. And the children would have grown up in the knowledge of the importance of their purpose. Human sacrifices were made to the mountains — who were considered to be gods. When volcanoes would erupt, the Incas perceived the gods to be angry and offered a human sacrifice to calm the spirits.

Juanita’s clothing was also preserved and tells much of her status and of her experience at the time of her sacrifice. She would have been led up the mountain and given chicha, a fermented corn drink that would have sedated her before the moment of sacrifice. She was wearing a veil that covered her face at the time of sacrifice. Her tunic was red, which symbolized power and indicated her family was likely upper-class. She wore mountain shoes made of llama skin and alpaca wool to help her climb the mountain. She appears to have received a traumatic impact to her skull when sacrificed. This, plus the alcoholic beverage, would have helped the sacrifice to occur as quickly and painlessly as possible for the child. Her death is estimated to have occurred between 1440 – 1450 AD. How you can see Juanita

Juanita is on display for eight months out of the year at the Museo Santuarios on Arequipa’s Ave La Merced, just a quick walk from the Plaza de Armas. During the time she is not on display, another child mummy is brought in to replace her while she is stored at even colder temperatures. You will pay 15 soles (a little over $5 USD) to enter the museum, but you will still need to tip your guide in addition to this fee. Tours are available in several languages. The guides give a very thorough tour of the entire museum, which is kept rather dark to protect the old and vulnerable artifacts on display. Allow 45 minutes for the tour.

Juanita is certainly one of the highlights to any visit to Arequipa. We hope you’ll make time to see her when you’re there!