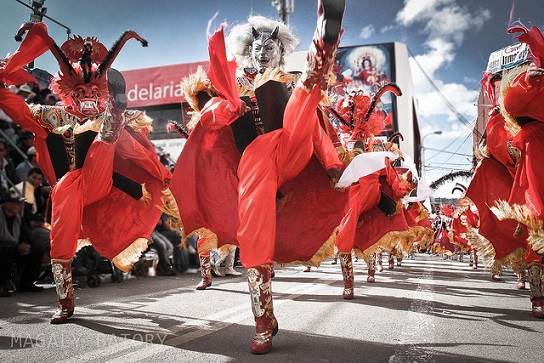 Among the many aspects of Peruvian folkloric customs, religious festivals have earned a special place in the hearts and memories of Peruvians and anyone else who has had the absolute pleasure of experiencing them.  Of all of these religious celebrations, there is one that stands out for its sheer vibrant colors and its ambiance filled with popular artists who have a contagious uplifting spirit and a very tender hospitality towards visitors.  It is the celebration known as La Fiesta de La Virgen de La Candelaria in Puno.

From Febuary 2nd through the 18th, the city of Puno — a port city to lake Titicaca, the worlds tallest lake when you take into consideration its relation to the sea level — dresses its streets in a festive mood that pays homage to the patron saint of the city: the Lady of Candelaria.

The Lady of Candelaria is one of the may representations of the Virgin Mary and whose following comes from Tenerife, Spain.  The Virgin’s name is attributed the original sculpture found in the Basilica Candelaria in the city.

Legend has it that during the vice royalty period, a large battle emerged between invaders and inhabitants in a villa in Puno.  Villagers from everywhere joined the fight against the invaders. Initially, the locals were loosing the battle, but the tide was turned when one villager took the Virgin’s image into battle.  The action rose morale and fighting spirits, and as a result of this, the city’s inhabitants were able to force the invaders into retreat.  Since then, La Candelaria is considered the patron saint of the land, and all of those who hold her in high regards ask for both protection and a good harvest.

The height of the festival is February 2nd.  This day begins with a break-of-dawn pilgrimage where the festival’s overseers, their invitees, and musicians trek to a hill where they all begin the first homage of the day to the Lady of Candelaria.  After that, the band of overseers and musicians descend from the hill with song and fireworks.  The singing and fireworks display continues until they reach San Juan Bautista Church, which is the sanctuary where the Lady of Candelaria resides. Morning mass begins as soon as the pilgrims arrive at the church.  By the afternoon, the farmers of the city’s limits parade into Puno on horseback and bring with them the Andean priests known as the “Yachiris” who bring offerings and prayers to the Lady of Candelaria.

The first Sunday of the month, everyone dresses-up an goes to the city’s stadium to see the festival’s folkloric dance competition.  The competition brings over 70 dance troupes (each with approximately 100 members) to the forefront, and they all perform folkloric choreographic dances from their respective regions.  Their main aim is to please the Lady of Candelaria, and the winner’s who emerge victorious take the year’s title and bragging rights to their hometowns and villages.

With the competition over, the musicians and dancers exit the stadium and flood the streets adding a wonderful spice to the already vibrant festival for the next seven days.  During this period, the peoples’ favorite dance ritual called the “Diablada” is performed.  This is an essential dance to the festival, and it originated when a group of trapped miners were given mercy and taken peacefully by the Lady of Candelaria.  During the “Diablada”,  dancers dress themselves in demon masks and as Jacancho the god of the mines.  The dance ends with the performers laying flowers on the graves of miners.

Among all the travel agencies that offer tours of the Lady of Candelaria festival, Dos Manos Peru offers packages of two to four days that include transportation to the lodge, board, a trip through the festival, tours of the Uro Isles, Amantani, Taquile, and the Bolivian city of Copacabana.

One of the best hotels to say in Puno during the festival is Hotel Casa Andina Puno Plaza located a block from the Plaza de Armas and seven minutes to lake Titicaca by car.  The hotel offers internet services, a business center, a parking lot, storage facilities, a laundromat, medical services, safe boxes, and a breakfast buffet for first day guests.

The weather is a bit chilly with some light rain.  Waterproof and warm clothes are recommended.  Sunglasses are also convenient, and don’t forget to bring plenty of film, needless to say a camera.