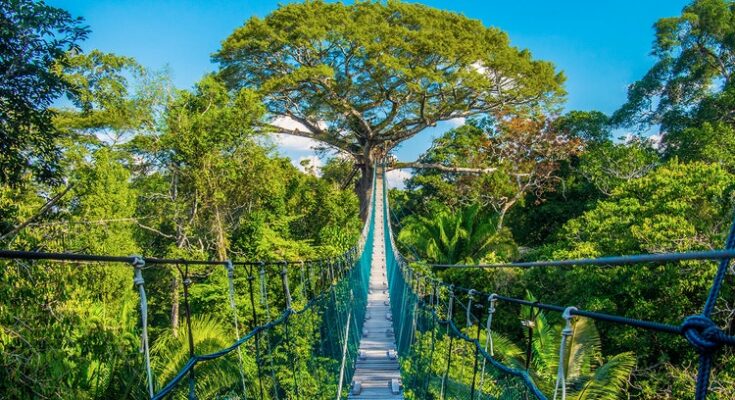 Travelers who enjoy an immersive experience can take part in biological and other scientific work during their stay in the forests of Tambopata.

The most common response to the question “what did you do in the jungle” is: “Well, I saw beautiful birds, took a boat trip and photographed enormous trees”. If anyone asks me the same question, I’ll say: “I helped discover species that were new to science”. Nothing less!! This unique memory is offered by Refugio Amazonas (part of the Rainforest Expedition lodges chain in Tambopata), which has added this activity to its tour, at no extra cost.

There are approximately two million insects known to science in the world, but every year new species are discovered. Some researchers believe that there could be anywhere between 10 and 20 million species of insects in the world. There is still so much more to discover, and that is how Refugio came up with the idea of asking its visitors for help.

You will find a researcher in the lobby who will fill you in on the type of species you’ll be responsible for collecting, and how to recognize them. You’ll be given the necessary equipment for the work you’re asked to do. Just a 15-minute walk from the lodge, in the darkness of the forest, you’ll help install a trap with electric lights. You’ll leave the trap lit for an hour, time enough for it to attract insects.

Daniel Couceiro, a resident biologist at Refugio Amazonas, participates in these sessions in which anyone is welcome to help with his nocturnal fieldwork. Children love the idea of being explorers for a few hours. When guests leave, the scientific work continues and the species that have been collected are sent to the Natural History Museum in Lima, where an expert entomologist classifies hundreds of insects every day. In 2016, the entomologist Juan Grados concluded that 11 species sent in by Daniel and his tourists were new to science. In other words, they did not feature in any encyclopedias or museums, and had never been registered before. And when a new species is discovered, the discoverers themselves are free to give them whatever name they choose!! A real achievement!!

In addition, Refugio Amazonas runs its AmazonCam program, which enables guests to participate in the recording of nocturnal mammals along its 132 kilometer trail system, in a 300 square kilometer area of forest. Guests can help the experts download the images captured by camera traps, and install new cameras. This program also collects images from its HarpyCam, which observes the activities of a pair of harpy eagles and their young. The Amazon Aerobotany program invites guests to accompany experts on an observation tower 32 meters above the ground, and observe how they program a drone to fly over the rainforest to gather photos and videos that assist in the study and conservation of Brazil nut trees, which are essential to the local economy. This project, known as Wired Amazon, is intended to democratize science and make travelers part of the scientific process.

Refugio Amazonas has 32 elegant and comfortable rooms with private bathroom and hot water, made from natural materials. The Superior rooms are twins, the Comfort rooms have double beds, and the Suites have king size beds. Electricity is available three times a day. Packages are all inclusive, with transport, guided excursions and all meals. The scientific activities are added to packages free of charge. The Refugio is situated three and a half hours from the port of Infierno in Puerto Maldonado. A night’s accommodation is available from US$276 per person, RainforestExpeditions.com